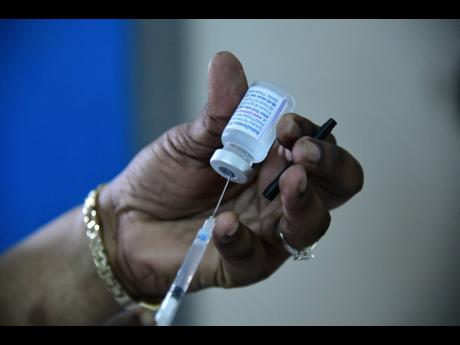 File
Supply-chain challenges have prevented Jamaica from procuring vaccines for children under 12.

Minister of Health and Wellness Dr Christopher Tufton said Jamaica could have commenced the immunisation of children under 12 if the required COVID-19 vaccines were available. Late last year, Cuba began a massive vaccination campaign for children...

Minister of Health and Wellness Dr Christopher Tufton said Jamaica could have commenced the immunisation of children under 12 if the required COVID-19 vaccines were available.

Late last year, Cuba began a massive vaccination campaign for children between the ages of two and 10, with its locally manufactured vaccines, while in the US, children five to 11 were being inoculated with Pfizer.

The COVID-19 shot for children five years to 11 years old is a lower dose than that recommended for people 12 years and older.

The minister explained that the “future production” for those vaccines has been booked in advance by deep-pocketed developed countries.

Since November 2021, Pfizer COVID-19 vaccines have been available to children 12 years and older in Jamaica.

At the end of December, 32 per cent of students in that age group were fully vaccinated.

With low vaccine take-up among the eligible population and hundreds of thousands of expired doses having been discarded, Tufton said that the rate of waste – which is within global benchmarks – would not discourage him from trying to procure vaccines for younger children.

“I don’t cry over the dumping, to the extent that it influences my decision to not want to purchase. I take the view that we should make it available to people, so whether hesitancy is 10 per cent or 80 per cent, that 20 per cent that wants it should be allowed the opportunity to get it and that is the action of a responsible government,” he said.

“It is better to err on the side of caution than have people wanting it and we don’t have it.”

The Government had set March as its timeline for 65 per cent vaccination coverage. But with only 22 per cent of the population fully vaccinated, that milestone appears unreachable.

“I have not been stuck on this 65 per cent number anymore, because I think the virus is best neutralised if we all buy into it. We are way below the target, we are at 22 per cent fully vaccinated and we really need to move with a pace to get more people on board,” the minister said.