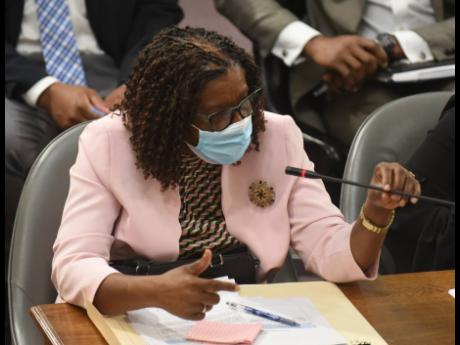 File
Permanent Secretary Audrey Sewell addressing a meeting of the Public Accounts Committee last June. Insisting "the truth is the truth" in Wednesday's meeting of another parliamentary committee, Sewell said that NCTVET had been transferred to the education ministry.

While the Ministry of Education and Youth struggles to iron out lingering policy issues that have left two critical training institutions in limbo, lawmakers turned up the heat Wednesday on a senior ministry official for allegedly misleading a critical oversight parliamentary committee.

On July 28, 2021, then acting permanent secretary in the Ministry of Education, Dr Grace McLean, told members of the Public Administration and Appropriations Committee (PAAC) that the National Council on Technical and Vocational Education and Training (NCTVET) was in transition and not yet within the ministry’s structure.

Her remarks contradicted those by chief technical director in the Office of the Prime Minister, Wayne Robertson, who had reported to the committee that NCTVET had been reassigned to the education ministry from HEART Trust NSTA since 2018.

Permanent secretary in the Office of the Prime Minister, Audrey Sewell, told members of the PAAC that the transfer of NCTVET to the Ministry of Education was gazetted in April 2018.

“As far as I am concerned, it has been there since,” Sewell said.

Chairman of the PAAC, Mikael Phillips, reminded his colleagues that the last time the issue was raised during committee deliberations, McLean had said NCTVET was not yet transferred to education.

Sewell told the committee that because of her previous experience at the Ministry of Education, she engaged the then acting permanent secretary to help advance the process.

According to Sewell, at the time, she had dialogue with McLean and the then chief technical director to offer her assistance in the transition and the processes that should have been followed to ensure full integration of the training agencies.

“So I am to be advised what it means that it is not in Education, and I am not trying to make anybody look anyway. The truth is the truth, and the evidence is there,” Sewell said.

Committee member Juliet Holness said that despite attempts by a technocrat from the OPM to correct McLean, she was adamant that “she was not aware of the transfer to the Ministry of Education”.

NOT OPERATING AS IT SHOULD

Trelawny Northern Member of Parliament Tova Hamilton said she has received numerous complaints from persons who said they have not yet received certificates from NCTVET.

Asked to comment on the issue, acting Permanent Secretary Maureen Dwyer told the committee that the Cabinet submission was being reviewed by the solicitor general for clarification on certain issues.

“As I understand it, the transition, which we admit, has taken some time ...” Dwyer said.

However, Holness stopped Dwyer mid-sentence, noting “because you are new you would get off with such an answer”.

She charged that McLean’s utterances on the issue were either an “unfortunate response of not being truthful, not knowing, not realising, but there was no sense that any transition even started”.

Phillips contended that while young people are being urged to get qualified, the country’s premier training institution had been languishing in “no man’s land” for three years. “It is, for me, a dereliction of governance overall,” he added.

Fitz Jackson, committee member, urged the education ministry to assume full responsibility for the entities while the various processes are being completed.