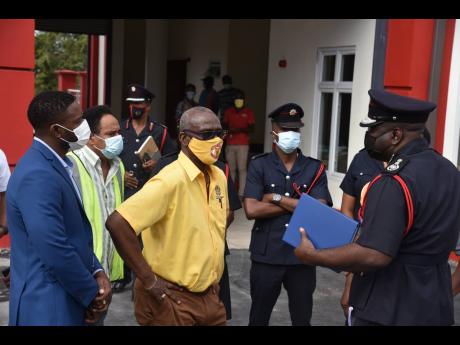 Inclement weather in the latter part of last year is being blamed for yet another delay in the planned opening of the newly built Montego Bay Fire Station in St James, but Local Government Desmond McKenzie has said that the building will become operational ahead of the celebrations for the country’s 60th anniversary of Independence.

“When we celebrate the 60th anniversary, this will probably be one of the showpieces in Montego Bay as part of the achievements because this will be the first major facility that has been constructed by the Jamaica Fire Brigade in the last 60 years,”McKenzie, who has portfolio responsibility for the Jamaica Fire Brigade, told journalists during a tour of the station yesterday.

The new fire station is being built at a cost of $534 million, replacing the previous facility at the corner of Barnett Street and Howard Cooke Boulevard, which was deemed to be structurally unsound and demolished in 2016 after operating for more than 50 years.

McKenzie noted that there were some minor works to be done at the facility.

“The contractors have completed their responsibilities in terms of the actual contract, and the [Jamaica Fire] Brigade is now working to complete the finer details of the facility,” he noted.

As it relates to the utility services on the building, McKenzie said those are almost complete.

“The sewage line has been extended. [It’s] just for the National Water Commission to make its connection [and] a service provider to provide phone and Internet. That is almost completed. We are going to ensure that we put in a very reliable standby generating system that will allow the facility to operate if there is no electricity,” he added.

McKenzie said that synchronised traffic lights will be installed to the emergency vehicles to easily access the roadway.

“That is one the features that is being worked on. The costing on that has been done. The National Works Agency has been engaged, and that would be put in, but we are not going to wait for that to be done,” he said.

Jamaica Fire Brigade Deputy Commissioner Kevin Haughton said that there will be no immediate issue with the flow of the traffic.

“We will be entering on Howard Cooke Boulevard and exit on Barnett Street,” he pointed out.

“We would have put our relocation plans in place and do the necessary orientation of our staff and work out which aspects of our roll-out will be coming in [first],” he added.

Montego Bay Deputy Mayor Richard Vernon said the fire station will be an important fixture for the city.

“It’s is very important that we have such a facility as this, with Montego Bay growing at the pace it is growing now,” Vernon noted.