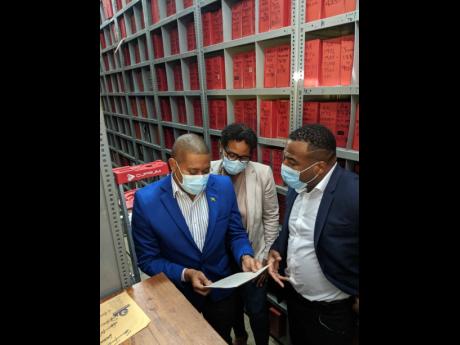 Sharlene Hendricks photo
Minister without portfolio in the Office of the Prime Minister Floyd Green takes a look at an original copy of his birth certificate during a tour of the Registrar General’s Department on Friday. The minister was accompanied by RGD CEO, Charlton McFarlane and, Director of Operations Management and Deputy CEO, Tameka Clough.

The roll-out of digital birth certificates is the next on the agenda as the Government gears up towards implementing the National Identification System (NIDS) that will see bedside birth registrations done electronically, and millions of records stored at the Registrar’s General Department (RGD) digitised in coming months.

On another of his mission stops since his appointment at the Office of the Prime Minister, Minister without Portfolio Floyd Green met with the managerial staff of the RGD on Friday to set the upcoming agenda for the Government in positioning the agency as a crucial arm of the NIDS implementation.

First on that agenda, said Green, is laying the groundwork for a full NIDS roll-out in 2023 with the provision of devices to bolster the department’s bedside birth registration process.

“That is part of our bigger drive to use 2022 to put everything in place so that when we get to 2023, we can embark on our digital birth certificates. We want to move our birth certificates to a digital space, getting rid of the paper, where people can get that electronically,” Green announced.

Ultimately, the process will involve the use of an app that is currently being developed to facilitate automatic uploads of bedside birth registration information to the RGD’s digital registry, expected to be operational by the middle of this year with a pilot in Kingston and St Andrew.

Green stressed that as part of the NIDS roll-out, key functions at the RGD will be bolstered, the most immediate of which will be the digitisation of the department’s bedside registration service.

“We want to take this a bit further. We want to make sure that that is done electronically and we will be coming very shortly to hand over devices that will be used across the island to operationalise that electronic bedside registration service.

“Clearly, the RGD will play a massive role in the National Identification System, starting with a pilot later this year, hopefully by the second half of this year, to get our pilot up and running in Kingston and St Andrew, to start actually producing national identification cards for Jamaicans.”

Chief Executive Officer at the RGD, Charlton McFarlane, told The Gleaner during a tour of the agency on Friday that the NIDS-supported digitisation initiative will make the department more efficient by reducing the need for more storage space as well as manual labour.

With the registry keeping watch over more than seven million records dating as far back at 1655, McFarlane said the digitisation process has already started, with about 25 per cent of its records now taking digital form.

“This is the action point of the digitisation project,” McFarlane stressed.

“About 25 per cent of the records have been digitised, back to around 1990. We have strategically digitised the most current records going back. And with the digitisation project, it will reduce the need for the physical space.”