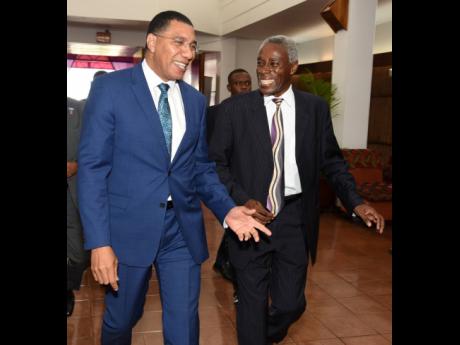 File
Prime Minister Andrew Holness chats with Professor Alvin Wint at the Jamaica Conference Centre on October 17, 2019. Wint is the new chairman of the HEART/NSTA.

And the managing director position has now been advertised, with staff told applications are due by February 4.

The top job carried $12.5 million in basic salary up to two years ago.

Wint replaces businessman Edward Gabbidon, who stepped down last December amid public concerns about him holding the chairmanship while being the CEO of a company that is a major technology supplier to the agency.

Permanent secretary in the Office of the Prime Minister, Audrey Sewell, confirmed on Monday that Wint’s appointment took effect on January 17, the date the nomination by Prime Minister Andrew Holness got Cabinet approval.

Holness is responsible for HEART.

After revealing that HEART spent more than $5.7 million on a board retreat with senior managers at a luxurious St Ann hotel in October, Holness told Parliament in December that the agency was in need of a refocus and would be subject to a comprehensive strategic review.

Just last week, Sewell told a parliamentary committee that the contract of the former managing director, Dr Janet Dyer, was not renewed after she admitted to approving salary hikes for senior officials without first getting clearance from the Ministry of Finance and the Public Service.

The committee’s push to find out the role of other officials in that affair yielded little, although Novelette Denton-Prince and Kevin Mullings, representatives from the key divisions who played a role in implementing the unauthorised salaries, were present.

Denton-Prince is the current acting managing director. Her substantive position is senior director of corporate services, which, up to last week’s meeting of the Public Administration and Appropriations Committee, included procurement, human resource, and office services such as transport.

Mullings is the senior director for finance and revenue services. Payroll has floated between both divisions over the years.

Despite queries from lawmakers, both said little about what personnel under their charge did, or how decisions on the salaries were made by the executive management committee of which they are members.

Denton-Prince said she could not answer some of the questions because of how they were framed, while Mullings said the salary scales were discussed at the executive management committee level and that approvals for payment came through HR.

Telephone calls and messages to Dyer, who returned last April to her position as principal director, HEART College of Hospitality Services in St Ann, went unanswered up to press time on Monday.

Dyer and the Gabbidon-board also presided over the $314-million merger of the functions of the National Youth Service, the Apprenticeship Board, and the Jamaican Foundation for Lifelong Learning into HEART.

Gabbidon is the CEO of SynCon Technologies and was appointed HEART chairman on April 3, 2017.

Between October 2006, when it started providing services to HEART, and November this year, SynCon won 197 contracts worth $303 million, with 44 per cent (40 contracts) of that monetary value coinciding with the period Gabbidon chaired the HEART board.

Up to October, the contract tally was 196 ($302.9 million), but HEART said an additional one worth $261,648 was awarded in November under extreme urgency procurement.

HEART and the OPM said Gabbidon declared his interest and was never involved in approving any of the contracts awarded.