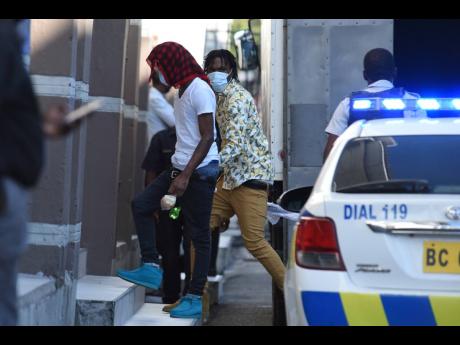 Kenyon Hemans/Photographer
Two alleged members of the notorious One Don Gang are escorted to the Supreme Court on Monday. One Don is a breakaway faction of the Clansman Gang.

Two police witnesses have insisted that they never fired a single shot at the alleged member of the Clansman-One Don Gang who fired at them repeatedly before he was chased and allegedly held with an illegal handgun in 2017.

Both officers recalled, during their testimony at the resumption of the trial in the Home Circuit Court on Monday, that the alleged gangster, who they identified as defendant Tareek James, had shot at them several times - first when they were in the marked service vehicle and again while they were chasing him.

Although he could not recalled the exact number of shots fired, one of the constables, who first testified, said it was over three on both occasions.

But when asked by James’ lawyer, Davorna Wilson, how many shots the police had fired, the police said emphatically, “None!”

The witness said even though he thought about returning fire while he sought cover on the ground, he did not discharge his firearm because he feared harming others or damaging property.

The second witness further testified that he, too, had refrained from firing, as his colleague was in front of him.

The two constables were reportedly part of a three-member team on mobile patrol in Rivoli, Spanish Town, St Catherine, on November 7, who allegedly came under attack from James, previously identified as one of the gang’s top shooters and the bodyguard of reputed gang leader Andre ‘Blackman’ Bryan.

Both witnesses said they saw when James alighted from a Nissan Latio and turned and fired at them in the car before running off.

According to one of the lawmen, before they spotted the car which had raised their suspicions after making a sudden right turn, they had received information about the same vehicle.

However, after they were fired upon, they told the court that they alighted from their car and chased the alleged shooter.

The lawmen recalled that while they were chasing James, he allegedly fired at them a second time before seeking refuge in a yard where he was held.

According to one of the lawmen, he had to hit the deck to avoid being hit by the gangster, who he claimed was still attempting to fire at him when he “tactically” approached James in the yard hiding under a board.

The police constable told the court that he noticed the alleged gangster pullling the slide on the gun back and forth.

But he said: “He appeared to have had a stoppage - meaning the gun couldn’t fire.”

James then reportedly complied with the constable’s command to drop the gun and was arrested and taken to the Spanish Town Police Station where he was charged with illegal possession of firearm and ammunition for the Sig Sauer .45 pistol and cartridge with six rounds allegedly taken from him.

During cross-examination from Wilson, both constables rejected suggestions that James had not shot at the police.

The policemen, however, were unable to say how many, or if any, spent shells were found at the scene.

One of the lawmen also disagreed with a suggestion from Wilson that it would have been impossible for her client to fire more than six shots, as the cartridge had the capacity to hold seven rounds.

The cop, however, told Wilson that he did not know how many rounds a cartridge for that type of gun would contain.

Meanwhile, the police corporal who had charged James and had secured the weapon and the ammunition which were submitted to the court on Monday said the alleged gangster told him that he was never in the Nissan motor car and that he saw it speeding by.

The cop said James also told him that he was on his way from visiting his girlfriend on the day in question. However, the witness said that efforts to find the girlfriend were unsuccessful.

The policeman said the car was located on French Street in Spanish Town and was seized.

The trial will continue today before Chief Justice Bryan Sykes.