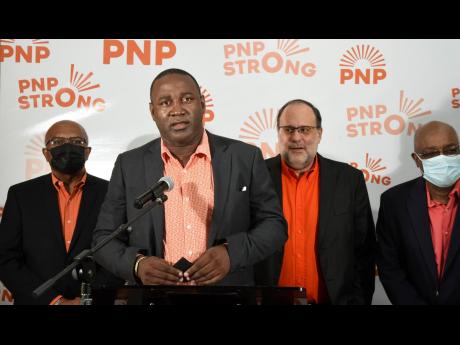 Opposition Leader Mark Golding has pushed back at claims by former People’s National Party (PNP) Chairman Phillip Paulwell that the organisation would suffer dire consequences for its decision not to support the extension of states of emergency (...

Opposition Leader Mark Golding has pushed back at claims by former People’s National Party (PNP) Chairman Phillip Paulwell that the organisation would suffer dire consequences for its decision not to support the extension of states of emergency (SOEs) last year.

Golding, in a Gleaner interview on Tuesday, rejected Paulwell’s warning as misguided, arguing that the decision was grounded on principle and not political expedience.

“I disagree with the notion that we will be paying a political price for that, and in fact the history of this matter suggests that we never got any political kudos for positions that were taken previously, so as far as I’m concerned, it’s not really about trying to win political mileage. It’s about doing the right thing by the Jamaican people,” Golding said on the sidelines of a press conference at his West Kings House Road office.

SOEs have been the source of political contention amid surging murders, with killings increasing by 10 per cent in 2021.

Murders have risen by 16 per cent this month, with 111 casualties – 18 more than for the corresponding period in 2021.

The Government has insisted that emergency powers are needed to crack down on the murder wave, but the Opposition has contended that saturation policing and improved investigation will prove successful. The Opposition has also proposed the expansion of zones of special operations.

Opinion polls have shown SOEs to be popular, but the Opposition said that confidence in the measure’s efficacy fell dramatically in some surveys to below 50 per cent.

“The initial positive relief which it brought to the hopes of people was, over time, reduced with disappointment and frustration without any meaningful reduction of murders at the national level ... ,” said Golding, who is also president of the PNP.

“No sustained benefits for our society, in terms of long-term reductions in the rates of violent crime, were achieved by the states of emergency,” Golding said during the press conference.

Murders and other serious crimes plunged in most police divisions under SOEs but the national toll remained steady, suggesting migratory gangsters spread their tentacles.

In November 2021, after a break for more than a year, the Government declared SOEs in parts of western Jamaica as well as the capital, Kingston.

But the measure collapsed after the Government failed to get the single opposition Senate vote needed for the approval of a three-month extension.

Golding said that thousands of young men from mainly poor socio-economic backgrounds were detained for extended periods under the SOEs without being charged.

“Many of them lost their jobs. It created hardship for their families and blighted their prospects in life. Very few guns were recovered. Very few of the thousands of detainees were ever charged for serious offences. The criminal gangs remain intact, simply moving to areas where the security forces were absent,” Golding said.

In 2020, a Supreme Court judge ordered the release of five men who had been detained for up to a year without charge under SOEs. The terms of those detentions were ruled unconstitutional.

The Government has appealed the decision.