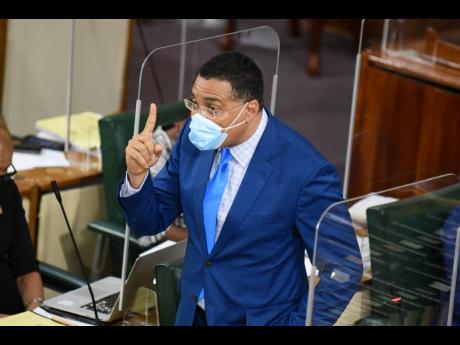 Kenyon Hemans/Photographer
Prime Minister Andrew Holness wags his finger during an address to Parliament on Tuesday.

Prime Minister Andrew Holness has dismissed claims that the Government has abandoned COVID-19 measures, making it clear that the protocols have not changed and the current restrictions will remain in force as “guard rails” to mitigate against “extreme events”.

In a statement to the House of Representatives on Tuesday, Holness said the narrative that the Government has shelved COVID-19 measures was not true.

He contended that the administration had no plans of returning to lockdowns and tighter restrictions, noting that this would create more hardship for Jamaicans.

“That argument done,” Holness quipped, drawing on a reference he has used in recent weeks that has drawn criticism.

Citing declining infections and marginal recourse to intervention with high-flow oxygen as positive signs, the prime minister announced that the current restrictions would remain in force until February 10.

“Let us done the ‘fool-fool’ arguments. We are moving forward with our economy; we are not locking it down again,” the prime minister insisted.

Taking aim at his detractors, Holness asserted that there were some who failed to acknowledge that Jamaicans need to take responsibility for refusing to make the right decisions concerning their health during the pandemic.

“You have an option: Get vaccinated. More than 95 per cent of the persons in hospitals are unvaccinated, and if you don’t want to take the vaccines, your business.

“I am not coming to hold you down to take any vaccine, but please wear your mask, sanitise, social-distance, avoid crowd, build up your immunity ... ,” he said.

Approximately 21 per cent of the population is fully vaccinated.

In his address to Parliament, the prime minister also reported that the genome-sequencing machine acquired by the Government last year has confirmed what was widely suspected: that the fourth wave of the virus was driven by Omicron.

He said that of the 43 samples sequenced, 40, or 93 per cent, were confirmed to be the Omicron. The samples were taken between December 21 and 24.