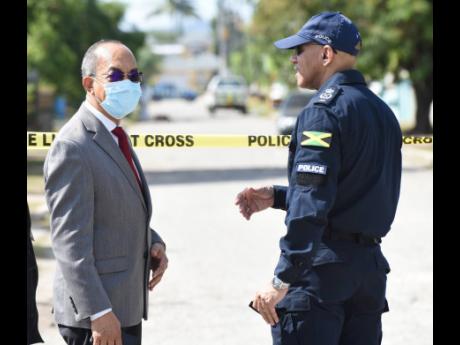 Amid a call to expand zones of special operations (ZOSOs) across more violence-plagued communities, the Opposition has laid down a two-month ultimatum to Commissioner of Police Major General Antony Anderson to curb crime or quit.

ZOSOs – joint security operations by the police and soldiers – have been imposed in seven communities islandwide, the most recent being in Savanna-la-Mar South, Westmoreland, and Parade Gardens, Kingston.

The Opposition People’s National Party has contended that ZOSOs were preferred to the much-disputed states of emergency, which were aborted last November when the Government could not secure a single vote from its political rivals in the Senate.

“We believe that the Government’s conception of the use of ZOSOs is far too narrow and limited. ... We believe that the ZOSOs are to be viewed as a lawful alternative to the states of emergency, the main difference being that extended detention without charge is not permissible and citizens do not lose their basic constitutional rights of access to court to protect their livity,” Opposition Leader Mark Golding said during a press conference at his office Tuesday.

“... When a ZOSO is declared, the JDF personnel have full policing powers within the area of the ZOSO, and law enforcement in that area is under the joint command of the JDF and the JCF,” Golding said, referencing the Jamaica Defence Force and Jamaica Constabulary Force.

Anderson received a scathing rebuke from Golding, who charged that the police chief had failed in his mandate.

“The record speaks for itself,” he said.

Murders have climbed this year by 16 per cent and serious crimes, overall, by more than 19 per cent.

That follows on a bloody 2021 which recorded 1,463 homicides, representing a 10 per cent rise year-on-year.

The murder wave – with 111 killings in the first 22 days of 2022 – prompted the security chiefs, Anderson and Rear Admiral Antonette Wemyss Gorman, to huddle with the Cabinet to forge a response.

“If the commissioner cannot find another strategic approach to getting the crime problem under control within the next 60 days, I think he must call it a day as well, and allow someone else to take up the mantle,” Golding said.

The Opposition has also called for National Security Minister Horace Chang to resign.

The prime minister has defended Chang’s retention in his Cabinet after a recent reshuffle.