No home yet for Ministry of Legal and Constitutional Affairs 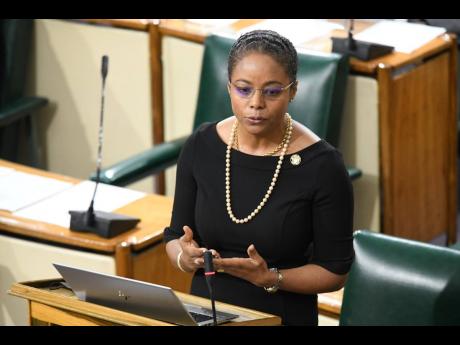 Rudolph Brown/Photographer
Marlene Malahoo Forte, minister of legal and constitutional affairs, addresses lawmakers during a sitting of the House of Representatives on January 18.

Permanent Secretary in the recently formed Ministry of Legal and Constitutional Affairs, Wayne O. Robertson, on Wednesday assured the Public Accounts and Appropriations Committee (PAAC) of Parliament that his team had hit the ground running even though they have not yet found a location to house the newly minted ministry.

The formation of the ministry, which is headed by former Attorney General Marlene Malahoo Forte, was announced by Prime Minister Andrew Holness during a Cabinet shuffle earlier this month.

The parliamentary oversight committee was reviewing the Third Supplementary Estimates for the ministry in respect of the relocation of some departments and agencies. Robertson explained that while he, along with Marlene Malahoo Forte and the core staff, were housed at the Office of the Prime Minister, staff members reassigned to the new ministry from the Ministry of Justice were still operating from the latter’s Constant Spring Road, St Andrew, office.

Financial Secretary Darlene Morrison told the PAAC that the adjustments proposed to the existing Budget for fiscal year 2021-2022 represented reallocations and did not alter the total budgeted expenditure of $893 billion.

The Law Revision Secretariat, which was formerly housed in the Ministry of Justice, as well as the Legal Reform Unit Office of the Parliamentary Counsel, have also been transferred to the new Ministry of Legal and Constitutional Affairs.

The Third Supplementary Estimates also provide for the transfer of records and information management and information regulators services from the Ministry of Education and Youth now that the information arm has been shifted to the Office of the Prime Minister.

“The ministry is organised despite not having a fixed location at this time. ... There is no manual to guide you as to how to set up a ministry, but notwithstanding, I have been working assiduously to ensure that the ministry is set up, and there are a whole lot of administrative matters that I am dealing with, the team is dealing with, as we speak,” Robertson told the committee.

He explained that for the time being, at least, they would continue to share corporate services with the Ministry of Justice, including human resources, internal audit, and accounts.

Committee Chairman Mikael Phillips warned the Government against giving the Ministry of Legal and Constitutional Affairs stand-alone status while starving of it of the necessary resources to make it truly effective.

Committee members agreed that the changes were mainly cosmetic and reflected a tidying up of the Government’s business with no additional drain on the Budget, and so their report will be circulated and signed in time for tabling in the House at next Tuesday’s sitting.