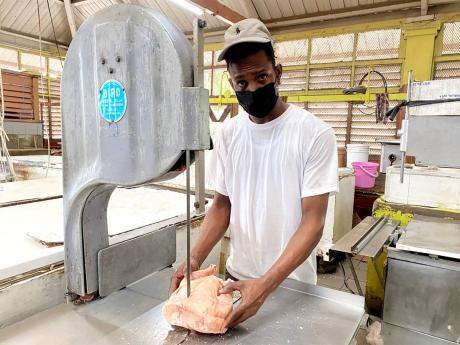 Photo by Ainsworth Morris
Junior Thompson, a young butcher at the Cross Roads Market, is worried about the impact of cheap chicken meat imports flooding the market. 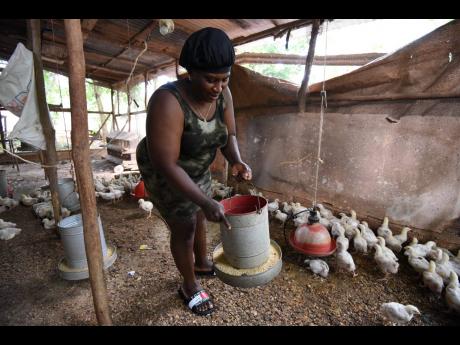 Ian Allen/Photographer
Nikiesha Francis of Cherry district in St Catherine tends to two-week-old chicks in her coop. She once reared more than 2,000 chickens but has scaled back production to 600 because of a hike in feed and other costs. 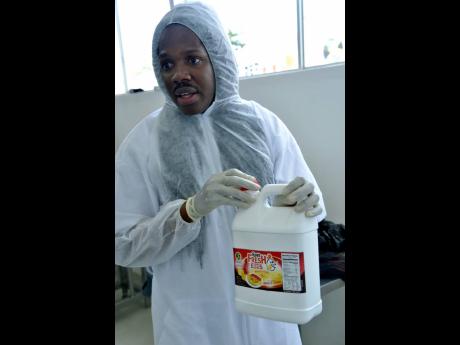 Opposition Senator Damion Crawford has lauded Agriculture and Fisheries Minister Pearnel Charles Jr for his courage in broaching the suspension of the Common External Tariff and other stamp duties on imported chicken leg quarters in a bid to provide a cheaper source of meat protein for consumers.

Charles, in his maiden address to the House as agriculture minister, floated a temporary freeze on the tariffs until the local market recalibrates to normal levels, saying that the move could cut cost to local consumers by more than half.

While the island's largest poultry producers have cautioned against the move, Crawford, an investor in egg processing and goat farming, recommended that extensive research be done on the prohibitively high cost of local chicken, which represents some 85 per cent of meat consumption in an industry providing 30,000 jobs.

“I think the minister is brave, and I applaud him for starting that conversation. We need to figure out what aspect of the process is causing us to be uncompetitive in price,” Crawford told The Gleaner. “If it is that the American government is seeking to encourage their farmers, then you can't blame the Jamaican Government if it seeks to do the same with whatever mechanism we have. However, if it's a case of supernormal profits, then something has to give.”

Economist Dr Damien King believes that the multiplier effects of the protectionist duties do significantly more economic harm than good.

Junior Thompson, one of several young butchers operating in the Cross Roads Market in St Andrew, believes the suspension of the tariffs could deal him and other persons in the sector severe economic blows.

Lamenting that he had been racking up losses since the start of the pandemic, Thompson believes that butchers in the markets would lose even more potential sales if customers begin flocking to wholesales and corner shops for cheaper imported chicken meat.

“Most of our supplies come from small businesses – like farmers in the country – so if yuh a go import leg quarters, there won't be any market for the small farmers,” Thompson, who has been operating at the market for six years, told The Gleaner.

He, however, noted that some Jamaicans who dislike imported meat would still venture to the meat market for home-grown meat.

Stefan, a young poultry farmer in the same market, was equally concerned.

“Mi nuh agree with it! Total slackness! That's what most of Jamaica life off of!” said the young man, who has been selling in the market for the last two years.

“Many people live off a that and send dem kids go school, pay dem bills. Wah a go happen to dem at the end of day when dem import leg quarters?” Stefan asked.

“Any kind of importation, weh we know we can do that for ourselves, will not be good for the country. ... It nuh better we buy the local one same way and keep our industry going?” he said.

Another seasoned butcher told The Gleaner that Charles should have dialogue with feed manufacturers as it is the hike in that area that was the main driver behind rising expenses for chicken farmers.

Meat buyer Ann-Marie said that rather than being concerned about digging deeper into her pockets, she was more worried about the fate of persons in the local sector if the demand for local meat falls.

“Mi used to work at Caribbean Broilers, but I'm not working there anymore. If you import chicken, weh mi friend dem a go get work and dem have pickney fi go a school?” she pondered.

“Let's be honest. We all want to save back in these times, said Rodreico Thompson, who was seen in the market purchasing local chicken meat. “If the imported leg quarters are sold for $160, mi a switch and buy it. Mi nah go lie to you. Mi a switch because chicken a chicken.”