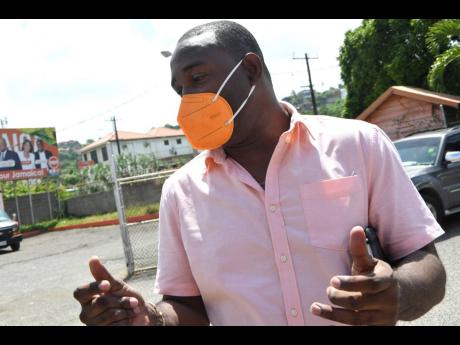 At the same time, the political ombudsman is disappointed with PNP President Mark Golding’s refusal to apologise for remarks he made about Montague.

And in another matter, Central Kingston Member of Parliament Donovan Williams has reportedly failed to meet with the political ombudsman over allegations that he, last year, painted a constituency sidewalk green, the JLP’s colour.

Golding drew the ire of the political ombudsman when he described Montague as a “likkle bwoy” and “minister of scandals” while addressing Comrades in a meet-and-greet tour late last year.

She found Golding guilty of unbecoming political behaviour and ordered him to publicly apologise to the subject of his “demeaning” comments and pay a maximum of $20,000 to a charity in the offended party’s constituency.

Regarding Campbell’s remarks, Parchment Brown told The Gleaner on Thursday that while there has not been a formal complaint against him, she has started to gather more information amid public outrage.

Parchment Brown said she has started an “unofficial investigation, and part of that is speaking to him to better understand exactly what was said because I only have part of what was said”.

“So like Bobby Montague is the leader of the black section of the Labour Party,” said Campbell, apparently comparing Montague to the Chinese-descended National Security Minister Dr Horace Chang, who retained his portfolio in the Cabinet despite growing unpopularity.

Parchment Brown said the findings of her probe would determine whether there was a breach of the Political Code of Conduct.

The political ombudsman said she was seeking to have further discussions with Campbell on Thursday.

Turning to the alleged breach of the Political Code of Conduct by Golding, the political ombudsman said that the PNP president did not accept her recommendation and has not acted on them.

Asked what would be her next move, the political ombudsman said that “there are consequences in the public square”.

She explained that her mandate is to investigate and make recommendations.

Golding was invited to meet with the political ombudsman to discuss the matter, but the PNP president, reportedly, has not acceded to that request.

“If he is so minded, I am still open to a discussion,” Parchment Brown said.

“So the recommendations are still there, and I would very much like to see him act on one or more of them,” she added.

She made it clear that the Political Code of Conduct is an agreement between political parties to “serve Jamaica” and not an accord with her.

On the Kingston Central political paint job, the ombudsman said she had scheduled two meetings with Williams. His attorney said, in the first instance, that he would not be available. Williams offered a similar reason for not accepting a second offer.

“The matter is still very much alive, and I am pursuing a meeting with MP Donovan Williams,” she said.

Parchment Brown reminded Williams, who is an attorney, that the Political Code of Conduct spoke to the action of “defacing”, noting that the painting of sidewalks in party colours was a breach.