Salt Spring children get ‘safe passage’ for trek to school 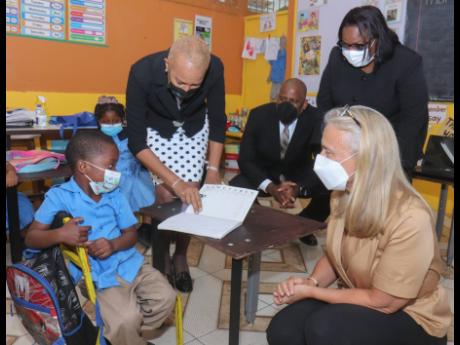 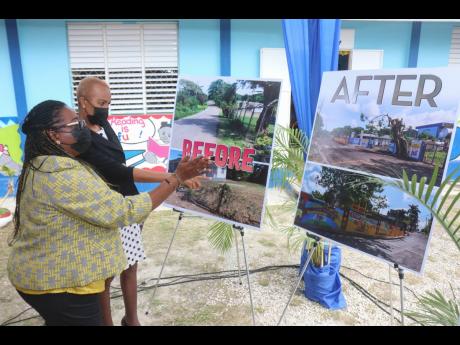 Ashley Anguin
Education Minister Fayval Williams (right) is being shown photos before and after the completion of the Salt Spring Safe Passage Project at Salt Spring Primary school in St. James on Thursday by Mona Sue Ho, senior manager of the Jamaica Social Investment Fund at the official hand over ceremony at the school. 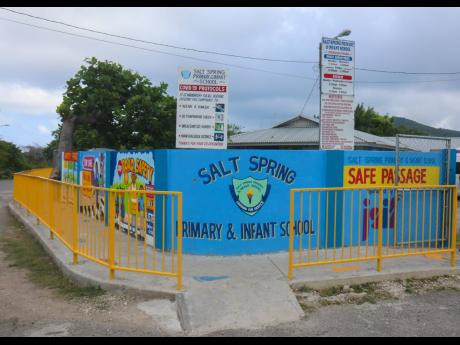 Ashley Anguin
A section of the guard rails and sidewalk in the vicinity of the Salt Spring Primary School in St James. The sidewalk and rails were among the new facilities created as part of the Jamaica Social Investment Fund’s (JSIF) Salt Spring Safe Passage Project.
1
2
3

The students of the Salt Spring Primary School in Salt Spring, St James, will now be able to walk along the roadway to and from school in a much safer environment, following Thursday’s official handover of the Jamaica Social Investment Fund’s (JSIF) Salt Spring Safe Passage Project.

The project, which falls under JSIF’s Integrated Community Development Project II, was implemented between May and November 2021, at a cost of $14 million and will benefit 180 students of Salt Spring Primary School and 30 students of the nearby Hartfield Basic School.

Faith Clemens, chairperson of the Salt Spring Primary School Board, expressed profound gratitude for the new facilities, which include 400 metres of newly constructed sidewalks and safety rails, road signs, bus sheds and pedestrian crossings as part of a road safety public education programme.

“We are so grateful to JSIF and all local persons who worked along with them on this project. I am so thrilled to see what is happening at Salt Spring,” Clemens said in a brief address at the ceremony.

The Safe Passage Project has already been implemented in eight schools across Jamaica, under the first phase of the Integrated Community Development Project, which was funded by the World Bank. Four other communities are being targeted for the project under the current phase, to include Anchovy, St James; Tread Light, Clarendon; Greenwich Town, Kingston; and August Town in St Andrew.

JSIF Chairman Dr Wayne Henry said that the Safe Passage Project was created in response to concerns about children’s safe navigation of the roadway when travelling to school, as nine children were reported among the more than 400 persons who died on Jamaica’s roads in 2021.

“Road safety is a national cause for concern, as hundreds of Jamaicans, including children, have lost their lives annually due to road accidents. In 2021, 484 persons lost their lives on our nation’s roads, and 62 of these persons were what the Road Safety Unit classified as vulnerable road users, including motorcyclists, pedal cyclists, pillion riders and pedestrians,” said Henry.

“Approximately 20 per cent of those persons were pedestrians, and last year up to June 2021, the Road Safety Unit recorded that nine of our children died while navigating their way on our roads. The Safe Passage Project is an intervention to support the safe commute of children to and from school, using specific roadways and thoroughfares,” Henry explained.

Meanwhile, Deputy Superintendent of Police Angela McIntosh Gayle, of the St James Police Division, said that the children of Salt Spring can now experience more positivity in their lives, thanks to the Safe Passage Project.

“The welfare of our children is pivotal to the development and growth of all communities. The outstanding services of this organisation must be lauded and JSIF has nailed it again,” said McIntosh Gayle. “Children are our future and when they see that people do care, they will adopt a more caring attitude.

“With the level of violence being experienced in recent times, it is very refreshing to put smiles on people’s faces.”