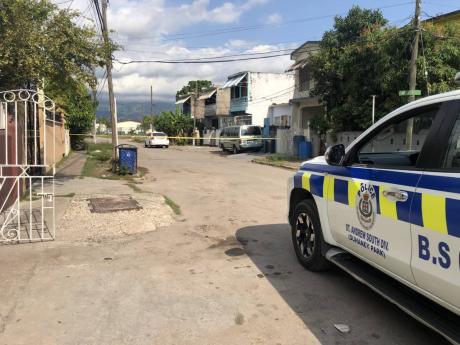 Asha Wilks Photo
Lowell Avenue in Duhaney Park where four persons were shot by men travelling on a motorbike on Friday afternoon.

Fear has gripped residents of Lowell Avenue in Duhaney Park after two men on a motorbike sprayed members of a household in the community with bullets yesterday afternoon.

The Gleaner understands that four persons suffered bullet wounds and were rushed to the hospital for treatment. Up to late yesterday, the police did not know the identity of the victims.

Shots rang out about 1:25 p.m. when gunmen disguised as construction workers drove past a residence on Lowell Avenue on a motorbike and opened fire, then made good their escape.

The residents were reportedly sitting on their veranda when the incident occurred.

Senior Superintendent of police in charge of the St Andrew South Division, Kirk Ricketts informed The Gleaner that a police-military patrol had passed the location moments before assailants attacked the home.

Ricketts said the attack was the first of its kind on the avenue. However, he explained that the police have been pursuing the perpetrators of violence who have been terrorising the community.

He reasoned that it was possible that the assailants had been nearby to observe when the patrol personnel had left the area.

“If it’s not them, it could be persons acting on behalf of them. This is the norm ... just as how we (the police) sit and plan our operations, they don’t just get up and do these things you know, they plan it also and they have sources who tell them where to go [and] when to come and so on, so that’s something that we just have to counteract on a daily basis,” said Ricketts.

One resident told The Gleaner that the victims of the shooting were three brothers and the girlfriend of one of them.

The resident who asked not to be named said the brothers were good people who were not involved in any illegal activity to her knowledge.

“A some good guys... and people woulda say everybody ago say every people good but is good guys who have them parents weh work, mother deh a foreign, father deh a Jamaica ... and him kids them a hustle with dem fada,” she explained.

The brothers were known to spend a lot of time on their veranda, relaxing and conversing with one another.

While not being oblivious to the violence in the neighbourhood, the resident said because many people frequently ordered food online for delivery, it became common to see bikes driving around the community. She said as a result of this no one could have suspected that two men dressed as if they were returning from work were actually gunmen.

“You nah go know, yah go think a good people them but when you take a look, a gunman dem,” she lamented.

“You just haffi stay inna yuh house and beg God fi cover yuh children dem and cover yourself... because that mean say you nuh safe inna yuh house, if you cyah even deh pan your veranda a betta you stay in,” she added.

Another resident who came out to view the scene which was secured by the police told The Gleaner that incidents such as this have become a regular occurrence.

“I just heard the sounds of the bike and the shots and when I look it was a bloody mess...I’m just glad that my son wasn’t home,” she exclaimed.

“It is just sad though to see the young lives [perish]. I hope they don’t die …”.