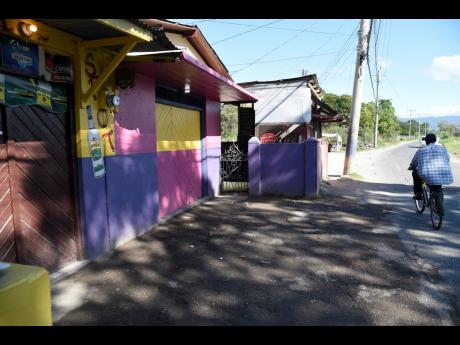 Ian Allen/Photographer
A pedal cyclist rides past the shop on Featherbed Lane in Spanish Town where gunmen shot and killed a man Tuesday night.

Gunmen firing indiscriminately inside a shop along Featherbed Lane in Spanish Town Tuesday night killed one man and injured two others, including a 15-year-old Ascot High schoolboy who is hospitalised in serious condition.

The incident, which occurred about 9:15 p.m., resulted in the death of 58-year-old labourer Desmond Beckford of Martin Street in Spanish Town.

Residents said that Beckford and the 15-year-old were collateral damage because they were not believed to have been the targets.

Reports are that Beckford, who operated a soup business at the front of the shop, was standing in the shop when a man who was being chased by two gunmen sought cover.

The attackers reportedly fired rounds in all directions.

The 15-year-old, who had gone to purchase food for his mother, was on his way out of the shop when he was hit multiple times in the lower body.

Beckford was pronounced dead at hospital, and the other two admitted. The teenager underwent surgery.

“A nuh ‘Soupy’ and the youth dem want, but them just at the wrong place at the wrong time,” said one man who asked not to be identified.

“I just left the shop and by the time mi reach mi gate, mi hear a whole heap of shot,” he added.

Another man who lives near to the shop pointed to a bullet hole in the concrete column at his gate, suggesting that he would have been hit if he was standing at his usual spot.

“Mi just left the gate and go inside and then mi hear all the shot dem a go off. Mi a tell you, if mi was standing at my usual spot, you wouldn’t able to talk to me,” he said.

The mother of the student, who lives less than 200 metres from the crime scene, said she had heard the shots but never believed that her son could have been caught in the attack. He is the first of five children.

“They come for one man and they still have to shoot my son,” she said, with tears rolling down her cheeks.

The mother, who requested anonymity, lamented the distress traumatic incidents cause for families.

“I am just praying that he pulls though,” she said.