Caught in the middle

Children, other relatives struggling with traumatic realities in criminals’ wake 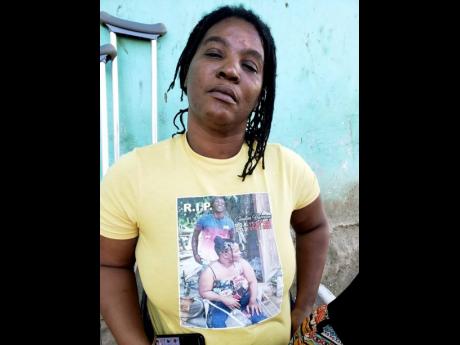 Hundreds of Jamaican children are being held hostages of gang violence, not only as homicide and trauma victims but also as innocent onlookers of their guardians’ criminal and deadly deeds, noted the State’s child protection agency.

Up to late Friday afternoon, the Child Protection and Family Services Agency (CPFSA) said it was still sorting out permanent accommodation for two children who were taken into state care following the seizure of 13 illegal weapons at a house in Trelawny on Thursday.

Luckily, the minors, who underwent medical examination before being put in a place of safety, escaped serious injuries in the early-morning operation that resulted in a man’s death and their mother being taken into custody.

More than 142 children have benefited from first-responders care since last April, from 65 incidents up to December. But this is not a reflection of the actual volume of cases islandwide, CEO of CPFSA Rosalee Gage-Grey cautioned, as there are not enough investigators to respond every time the police call.

The numbers include response to fires and other crises, but there has been a notable increase in the number of shooting incidents, said the CEO, citing interventions following the shooting deaths of at least three children in Central Kingston since October last year.

“On the ground, the children are very much involved,” noted Gage-Grey. “They may not be directly involved, but they get caught in these things, and it has been very difficult on the first responders. Our reports are mirroring the top crime hotspots.”

The western parishes of the island have so far accounted for the majority of homicides this year, and have been the most challenging for the CPFSA first responders. Children, their friends, parents, and relatives are being killed, and responders, like the police, have to be moving from “scene to scene”, Gage-Grey shared.

“Sometimes the children don’t go into shock at the same time, but then they go into shock later on, and that can become very problematic,” she also noted, citing withdrawal, depression, disobedience and a general breakdown in behaviour as manifestations of children’s trauma as a result of violence across the country.

But while attention is placed on the usual crime hotspots where the trauma is commonplace and frequent, children in deep rural communities that are seeing an outbreak of gun crimes are often overlooked.

The rustic Seaforth community in St Thomas is one such, where life for one 10-year-old girl has been transformed into a hellhole since her brother, contractor Clayton Harrison, 30, was murdered on January 7.

Since then, sleeping in her humble home on Packer’s Lane – metres from where her brother was killed at a bar after stopping on his way home from work – has been a nightly torment. She still hears the explosions that ended her brother’s life that ill-fated Friday.

“I see my brother’s face everywhere I turn in the house, and I miss him so much,” the child said, telling The Sunday Gleaner that these days, the joy of the expected KFC deliveries he brought has been replaced with tearful memories.

“Now, my brother will never get to see me become a veterinarian,” she added as tears ran down her cheeks.

Harrison’s disabled mother, Sharna Anthony, said she now lives in fear, and while she believes she can cope without counselling, she is reaching out for help for her youngest child.

“I have lost my foot. He was really the breadwinner for the family. He was the one that was planning to help me out to buy the prosthetic leg,” wept Anthony, in reference to her son. “I cannot believe it and [his young sister] is taking it the worst.”

So far, police in St Thomas have only caught one suspect in relation to the three murders in the parish this year. Harrison’s killer, and those of another man, for whom Harrison’s killing is believed to have been a reprisal, have not yet been found.

The police said both men were killed as part of a feud between warring gangsters from Navarre Lane and Blacksmith Lane. Packer’s Lane has been caught in the middle.

“We have carried out searches in the [Seaforth] area and we have been having dialogue with the residents, trying to get them to understand that they need to break that conflict,” said Superintendent Allison Byfield, head of the St Thomas Police Division, noting that since then, the area has been tense.

In the meantime, Harrison’s mother and relatives are fearful, hoping no one else in their family will be harmed, especially her children, one of whom is a 19-year-old son.

“He (Harrison) helped a lot of youths. Bring them all about to do jobs on construction sites with him,” said a relative. “There are people who loved ‘Pampi’ (Harrison) and who take this harder than even we. You don’t know what they are planning, and it is us the family here who will be the targets, even though we have nothing to do with it.”