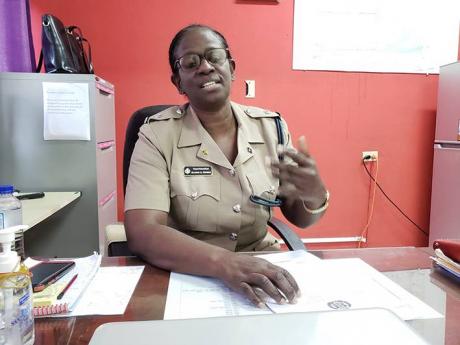 An autopsy has returned inconclusive into the death of a newborn girl allegedly buried by her 13-year-old mother and grandmother in St Thomas, an eastern parish in which half the persons most wanted by police are suspected sex offenders. At least...

An autopsy has returned inconclusive into the death of a newborn girl allegedly buried by her 13-year-old mother and grandmother in St Thomas, an eastern parish in which half the persons most wanted by police are suspected sex offenders.

At least six of a dozen men listed as wanted recently are being sought for rape while three others are wanted for having sex with minors – the latter crime police have cited as the underlying reason for the child’s death hours after birth in Airy Castle late last December.

There has been one report of rape in St Thomas since the start of 2022, and the cops are hoping it will not escalate, allowing them time to probe and develop court files for some 20 cases last year – a fall from 28 reported incidents the year prior.

According to the police, body of the infant, which had a head reportedly “full of hair”, was discovered in a shallow grave after cops acting on information they received.

The corpse was exhumed by law enforcement officers, who reportedly held back tears as they probed the scene.

The cops are still searching for the father of the dead child, who – like Davian Bryan, the accused sex offender child abductor for whom a massive manhunt was launched last October in St Thomas – has been on the lam.

The two men and several others currently on the run for alleged sexual offences are not among those listed as wanted, explained head of the St Thomas Police Division, Superintendent Allison Byfield, last week.

These individuals are at this point only “persons of interest” in matters that are under investigation. In order for suspects to be listed as wanted, police must have a warrant and a file on them, she said.

“We are working at this point to actually find the person who impregnated her,” said Byfield of the teen as she spoke to the sex abuse problem in the parish.

The usual mode of operation of perpetrators is that they flee the communities after reports reach the police.

“I think the males are just taking the rape as something normal or regular. So, too, is sexual intercourse with persons under 16. We have been having quite a number of them,” she explained, also responding to public criticism regarding the elusive Bryan, who was accused of abducting two girls last year.

“Davian is a hunter from Portland and he is also a fisherman. He knows the woods and he takes the woods for himself. Notwithstanding our efforts, we have lost a number of uniforms and boots searching for him in the woods, we have not found him,” Byfield told The Sunday Gleaner.

“We believe he was being supported by persons in the Bath area, but a hunter knows how to survive on nature’s produce. He stayed close to the riverbed and we started to hunt him there, but I think he realised that and has moved on,” she said, noting that St Thomas police have been working with sleuths in neighbouring Portland, where Bryan was facing rape and firearm charges, to try to collar him.

On Friday, St Thomas was among the parishes red-flagged for underage sexual offences by the Child Protection and Family Services Agency (CPFSA). So, too, were Trelawny, Portland and St Mary since face-to-face school was disrupted two years ago because of COVID-19.

“St Thomas has come on the radar for sexual offences, especially since the abduction of those two young ladies last year. Sexual offences tend to be under-reported but the medical officers were seeing some cases involving minors in the hospital and got us involved,” said CEO of CPFSA, Rosalee Gage-Grey.

In the meantime, the police say Bryan is being sought for an identification parade as well as to provide a DNA sample in relation to the case involving the two underage girls, who are still recuperating from their ordeal last year.

“We are not happy to say that we have not caught him, but we are not defeated. He is a danger to society, and we need to have him in custody,” Byfield stressed.

According to reports from the police and the Court Administration Division, sexual intercourse with a minor, rape, and grievous sexual assault top the list of most common cases for which bail was granted by the Home Circuit Court from 2018 to 2020.