A home for Valentine’s Day 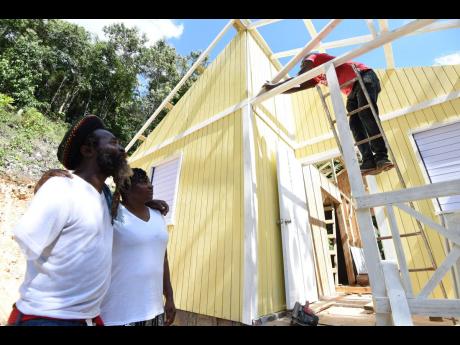 Ian Allen/Photographer
Carlton Francis (left) and his partner, Petrolin Blair, observer a workman putting the finishing touches on their new home, which is being built by Food For The Poor and Boom Energy Drink, in Lucky Valley, St Catherine, on Wednesday. The couple lived in a dilapidated board house that leaked heavily whenever it rained and often slept in the Coronation Market in Kingston. 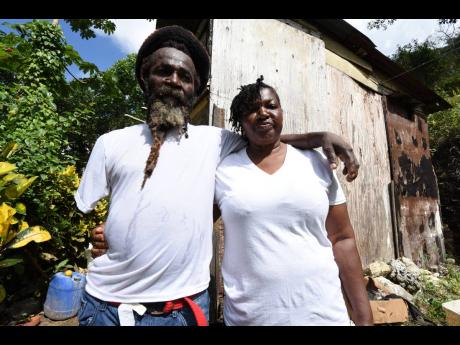 Ian Allen/Photographer
Carlton Francis and partner Petrolin Blair stand outside their dilapidated board house in Lucky Valley, St Catherine, hours before moving into the new one built by Food for the Poor and Boom Energy Drink.
1
2

Carlton Francis and Petrolin Blair’s heart-warming love story has moved donors to give the vulnerable couple a place to call home as an early Valentine’s Day gift.

The 62-year-olds, who have been together for 18 years, work in downtown Kingston’s Coronation Market, with Blair selling herbs and spices and Francis pushing handcarts for almost two decades, while occasionally sweeping the market to make ends meet.

Despite earning up to $6,000 daily, Francis said their income is gobbled up by food, transport, and medical expenses, with $10,000 going towards Blair’s medication.

Having ditched the farm as their stint in the fields didn’t work out for them, the couple had been living in a dilapidated zinc and wooden one-room dwelling in the tucked-away settlement of Lucky Valley district in St Catherine.

A large blanket of tarpaulin was hung from the ceiling to shield them from the elements due to the number of holes in their zinc roof.

Meals were prepared on a coal stove, and with no bed, the couple had been sleeping on the floor but would occasionally seek shelter in the market up to weeks at a time – to either be closer to work or to stay dry when their home got flooded.

But after all those years, despite Blair suffering from a variety of ailments such as diabetes, high blood pressure, and periodic memory loss while also being deaf, Francis has not found it difficult to love her.

What has kept his love so strong is Blair’s commitment to him, he told The Gleaner, adding that she has never ceased to care for him even when one of his arms was torn off in a job-related accident while on the back of a truck in 1983.

“She wash and cook for me. She working for me, so me haffi really love her,” he said.

Their only child together was stillborn.

Outside of her relationship with Francis, Blair has eight children, but none of them has been able to care for her.

In an effort to spread love, Boom Energy Drink, in its continued partnership with Food For the Poor (FFP), which started three years ago, have vowed to construct an additional 10 houses for Jamaica’s most vulnerable under FFP’s ‘Tan Ah Yuh Yard’ COVID-19 housing initiative.

“We saw it fit to gift them a home for Valentine’s Day because their love don’t cost a thing,” said Keteisha McHugh, brand manager of Boom Energy Drink.

FFP Marketing Manager Marsha Burrell-Rose said that every house donated is “wrapped with love”, and as the organisation launched its new design as with more people assisting the mission of the charity, they were able to improve on the kind of houses being built. The new homes, she said, can withstand a category three hurricane.

“It’s all about love, love for people, [and] love for just improving life,” Burrell-Rose added.

The residence, which is valued at roughly $1.5 million, has one bedroom, a kitchen, a dining room, and a loft area for added comfort. A septic tank is included, as well as a water-harvesting and catchment system that feeds the water into a water tank, and the installation of a small solar panel. The home is furnished with two folding beds, a stove, a dining table and chairs, and a two-burner stove.

Francis, who was brought to tears as he described how difficult their prior condition had been for them, expressed his gratitude for the generosity.

Madana Johnson, a long-time neighbour who has known the couple for almost 20 years, was also delighted that they received a new home.

“When I see the house a come through, I thank God ... because I know their situation. When I see the truck this morning, ... the joy that I feel and me say, ‘Yes! Pet house a go put up today’. Mi a tell you, man, it’s a joy!” she exclaimed.