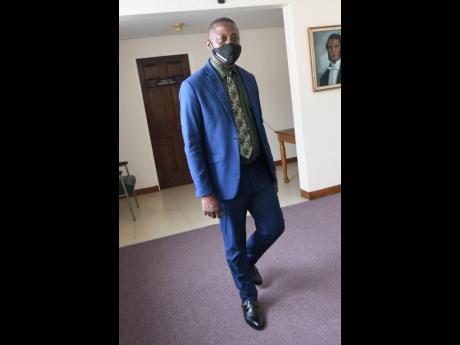 Rudolph Brown/Photographer
George Wright is seen at the Parliament building on Thursday. His decision to walk with the Opposition PNP stoked outrage among its members.

Controversial Westmoreland Central Member of Parliament George Wright is demanding an apology from Opposition Leader Mark Golding, who he has accused of verbally assaulting him during Thursday’s ceremonial opening of Parliament.

Wright, who last year resigned from the governing Jamaica Labour Party after a video emerged of a man assaulting a woman with his fists and a stool, was admonished by opposition members when they realised he walked among the group making the traditional trek up Duke Street.

He is said to have been the man in the video, a claim he has neither confirmed nor denied.

“I’ve been verbally attacked by Opposition Leader Mark Golding saying that someone must have sent me, which I find very much disheartening,” Wright told The Gleaner following the sitting of the Lower House on Thursday.

He said that as a sitting MP, he is “entitled” to the march, which is customary for the opening of Parliament.

Wright, who acknowledged that he was no longer part of the government benches, said this automatically meant that he had to walk with the Opposition People’s National Party (PNP).

“As a leader who wants to lead this country, it doesn’t look good to be verbally attacking a member of parliament in that manner. I wish and hope that the ombudsman would have seen this going viral and take quick action,” he said, referring to Donna Parchment Brown, the watchdog of political conduct.

“I’m not pleased and I would like a public apology from Mr Mark Golding.”

Golding and the opposition cohort were heading from the southern end of Duke Street towards Gordon House when Wright was spotted by St Andrew Western MP Anthony Hylton.

“George!” Hylton said, alerting his colleagues to Wright’s presence among the party.

At that time, members of the JLP were making their way to Gordon House from the opposite end of Duke Street.

“Why you walking with us? You’re not PNP!” said Golding.

In a Gleaner interview hours later, Golding doubled down on his position, calling Wright’s presence among opposition MPs “a despicable situation”.

He referenced the viral video, which captured the man beating the woman, noting that after its emergence, Wright was ostracised by being made to sit with the parliamentary Opposition.

“I said to him, ‘You should not be walking with us. You are not one of us. You are not part of our group. It is an insult and disrespect to us for you to be trying to do that,’” Golding relayed, insisting that Wright was pushed by government MPs to walk with the Opposition.

He denied that his communication with Wright was abusive and said there was no reason for him to apologise.

“I haven’t said anything that’s worthy of an apology. If he’s maintaining that he’s independent, which is a farce and is a lie and a deception because he’s not, he should have walked independently of us,” Golding charged.