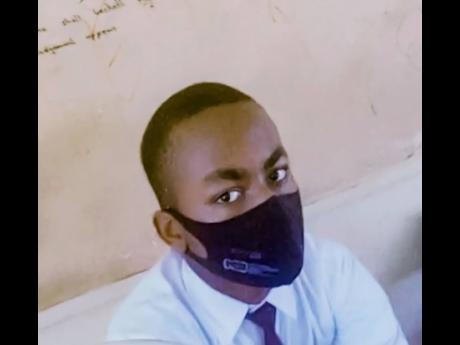 That is the grim assessment, by a close associate, of a grieving policeman whose teenage brother is believed to have shot himself fatally with the cop’s gun as the lawman had a bath Saturday evening.

The Clarendon police are now investigating the death of 16-year-old Javead Moodie but Deputy Superintendent Anton-Gur Cardoza, divisional head of operations, cautioned in a Gleaner interview against labelling the incident a “straight-up suicide”.

“Though we are not necessarily saying that anyone would have killed him, we don’t want to say straight suicide at this point in time, as it could very well be that this person was playing around with the firearm. You don’t know,” Cardoza said.

The policeman has not been identified. Javead attended Central High.

Sources informed The Gleaner that Javead died in his brother’s arms on the way to the hospital. The cop is reportedly overwhelmed with sorrow.

“Everyone just hugging him and he is not even talking right now,” said one source who spoke to The Gleaner from the Top Halse Hall home.

The cop had reportedly come home from work, undressed himself, and headed to the bathroom, in keeping with COVID-19 protocols.

It’s reported that Javead took up the policeman’s gun, which was resting on his clothes, and went into his room.

An explosion was heard and Javead was found suffering from a gunshot wound to his head.

Baldvin McKenzie, co-chair of the Clarendon Inter Agency Network, said that an emergency meeting was held Sunday evening as there is grave concern about the psychological state of youth in community.

He said the meeting was called to minimise the risk of similar occurrences and to activate intervention for youth already on the radar.

Local and global surveys and anecdotal reports have indicated heightened mental health stress during the two-yearlong coronavirus pandemic, which has shuttered schools for prolonged periods.

Edwin Singh, president of the Halse Hall Community Development Committee, told The Gleaner late Sunday that the planning for intervention was underway before the incident as stakeholders cited concern about a spike in fights among youth over the “slightest thing”. Those conflicts included stone-throwing incidents, trespassing, and theft.

“That is one of the concerns of the membership of my group. We feel parents under stress and not paying much attention to the children,” said Singh.

“You have some children, from school open back, they haven’t gone back to school. So that is one of the next things I want the Ministry of Education to look into.”

Rosalee Gage-Grey, chief executive officer of the Child Protection and Family Services Agency, disclosed that a team from her office had already been deployed to the community but she was yet to receive a preliminary report.

“Usually when we go into the community, and if we get feedback, then we plan a community intervention with all the other stakeholders. So, if there is a need that they have, then our team would respond as well,” Gage-Grey said late Sunday.