Plea for prayers as Tommy Lee hospitalised after prison bust-up 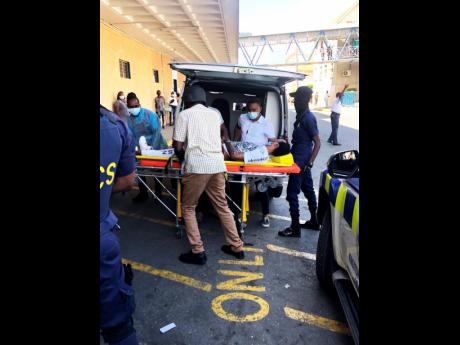 Photo by Andre Williams
Department of Correctional Services staff seek medical attention for incarcerated entertainer Tommy Lee Sparta at the Kingston Public Hospital in downtown Kingston on Monday. The artiste was seriously injured in a bust-up with prison warders.

Tommy Lee Sparta, whose birth name is Leroy Russell, was reportedly knocked unconscious and later hospitalised after an assessment at the prison’s medical centre.

Inmates who witnessed the brawl, some of whom recorded the incident, have expressed their displeasure at the situation.

One source told The Gleaner that several correctional officers had used batons to beat the entertainer.

“Dem bruck up bout three baton and him nah fight dem … . Mi nuh know if him say anything hurtful to dem, but him nah fight back. Him just a get pure beaten. One a di time dem, a inna him head him did a go get it and him use him hand and block it,” the alleged witness said.

The Gleaner understands that the artiste was motionless after the altercation and was later placed on a stretcher and taken to the medical centre at the facility.

Russell was later transported by ambulance to the Kingston Public Hospital (KPH) under heavy guard by correctional officers and the police.

The Gleaner saw open cuts and bruises on the left hand of the seemingly barely conscious Russell on arrival. His face also appeared swollen.

In a release yesterday, the Department of Correctional Services (DCS) said that an inmate, whose name was not disclosed, had refused to re-enter his cell following the distribution of breakfast and had hurled his breakfast at a member of staff instructing him to do so.

Both the inmate and the correctional officer received injuries as the officer tried to subdue him, the release said.

“I can’t comment on it for a number of reasons, chief among them I haven’t been able to see [him] because he has been undergoing treatment since this morning,” Martin said yesterday.

“This is to inform all supporters, friends, family and fans that we are aware of the situation with our dear family member and client … . We truly appreciate all your prayers and positive vibrational energy for his speedy recovery,” Boss Lady Muzik said in a post to the entertainer’s Instagram page.

The Gleaner understands that since then, some correctional officers have been given lesser roles inside the prison and a few run-ins have ensued.

Chairman of the Jamaica Federation of Corrections Arlington Turner told our newsroom that he was not aware of any previous encounter with Tommy Lee Sparta and correctional officers, redirecting our question to the DCS.

He had pleaded guilty to both offences after being found with the illegal firearm along Holborn Road in New Kingston in December 2020 and arrested.