Customs under microscope for gunrunning leak 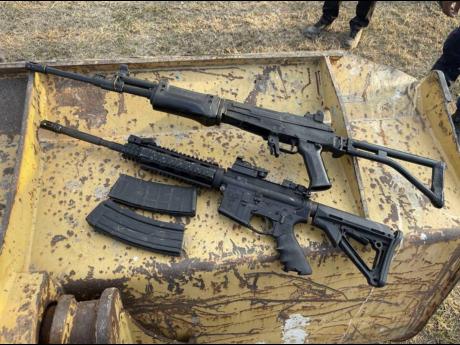 File
AK-47 and M16 rifles - two of several guns found at the Stadium East field in St Andrew recently. The Government is aiming to clamp down on gunrunning through the ports.

The Jamaica Customs Agency is coming under close scrutiny for leakage and corruption as the Government seeks to clamp down on security breaches linked to the smuggling of illegal guns.

Prime Minister Andrew Holness made the revelation as he unveiled a suite of reforms and programmes agreed at a National Security Council meeting on Thursday aimed at reining in the flow of illegal weapons, which contributed to the majority of Jamaica’s 1,463 murders in 2021.

The targeting of Customs breaches is believed to be key to the Government’s recently launched Get Every Illegal Gun campaign although the island’s more than 140 informal ports of entry are a sieve for boaters from Haiti and Latin America.

“It is now time that we get tough on the internal collaborators and facilitators who are allowing illegal guns to come into our country and they get rich from it while the poor people die from it. It is time that they face serious consequences for their actions,” said Holness during his address at the groundbreaking ceremony for the Stony Hill Police Station in St Andrew.

The prime minister was adamant that serious action will be taken within the agency to uncover illegal guns, issuing a strong warning to persons who may be involved.

“I want them to know that, without fear or favour, that we will be looking very seriously and very closely at operations of those areas.

“And just as you have seen, the new anti-gang task force rolling out and taking in some of the criminals, you will see a similar action within Customs to get the illegal guns and the facilitators,” he said.

Arrests and prosecutions from gun seizures at Jamaica’s wharves are rare, a trend that has drawn public criticism of the police.

The National Security Council also agreed on implementing changes to the application process and hiring practices at the Firearm Licensing Authority (FLA), with more rigorous eligibility criteria to be introduced.

The agency has been embroiled in a corruption scandal, with current CEO Shane Dalling engaging in a tell-all about 200 ex-convicts and others of questionable character whose applications for gun licences were approved after initial rejections.

The changes, the prime minister said, will include the mainstreaming of intelligence agencies in the approval process for firearm applications and the introduction of new technologies for the marking and tracing of firearms and ammunition.

The removal of the security minister’s discretion in the approval of gun licence applications was also considered at the meeting, but no decision was finalised.

There will also be fit-and-proper hiring practices to be introduced for FLA board members.

“We discussed and approved a more in-depth system of vetting of persons at the FLA and at Customs, and we also considered and approved the changing of the requirement to serve on the FLA board,” said Holness, further announcing that funds for the Get Every Illegal Gun campaign will be drawn from the FLA budget.

“I’m also authorised to announce that the FLA will give the first provisioning of the Get Every Illegal Gun fund of $25 million,” the prime minister said.