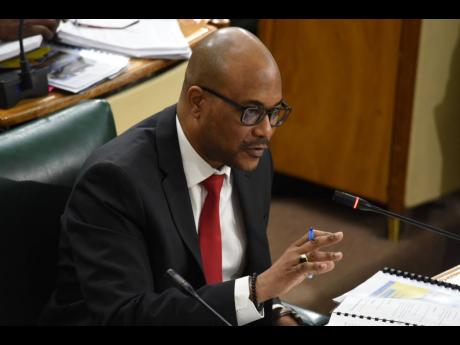 A member of parliament, at least 10 current and former permanent secretaries and 10 senior local government officials are among more than 150 names that the Integrity Commission (IC) submitted to two financial institutions last year for key...

A member of parliament, at least 10 current and former permanent secretaries and 10 senior local government officials are among more than 150 names that the Integrity Commission (IC) submitted to two financial institutions last year for key information, a Sunday Gleaner investigation has found.

First Global Bank (FGB) and Barita Investments Limited, however, have refused to comply with the June 2021 request, pushing the State’s main anti-corruption agency into seeking a court order to force them to hand over the information.

The Integrity Commission has said it will not comment on the Supreme Court matter until it is over. The last hearing was on February 16.

This newspaper broke the story earlier this month but new details have emerged on the commission’s request, including the list of names for whom information is being sought. The names will not be disclosed at this time, however.

The Integrity Commission’s June 28, 2021 letters to FGB and Barita were signed by Craig Beresford, the director of information and complaints.

He told the institutions that he was seeking the information from them as part of his lawful duty to make enquiries to certify or determine the accuracy of statutory declarations submitted by the public officials.

The commission told the companies that it wanted information on if the individuals maintained an account with them, as well as any subsidiaries, whether directly or by association with a company, trust or other means.

The requested data for each person included bank account balances and financial investments as at December 31 each year for the period January 31, 2016 to December 31, 2019.

It also sought details on the dates on which the accounts were opened and their status.

The information is being sought for approximately 151 individuals covering at least 10 former or current permanent secretaries. The request also covered the spouses and children of many of the officials.

A government member of parliament was the only politician at the national level on the list, which included a mayor and at least three councillors drawn from the ruling Jamaica Labour Party and the Opposition People’s National Party.

At least 10 of the officials are senior administrators in various municipal corporations, including Kingston and St Andrew, St Ann, St James and Westmoreland.

Along with three police sergeants and a deputy superintendent of police, there were also officials from Jamaica Customs Agency, the Urban Development Corporation, ministries of National Security and Transport and Works, the South East Regional Health Authority and the Office of the Services Commission.

The Integrity Commission told FGB and Barita that their response was required by July 19. It is not clear whether similar requests were made of other institutions.

But Barita and FGB refused to comply, apparently expressing deep concerns over the legality of the request and fearful of breaching privacy and confidentiality agreements with their customers under the Banking Services Act.

It has also sought a declaration from the courts on the interpretation of Section 7 (8) which says any person or body cooperating with the commission shall not be prevented from doing so by any other law that provides for secrecy or other restrictions against disclosure, except on the basis of legal professional privilege.

The GraceKennedy Group-owned FGB did not give much on why it did not comply with the request, even as it said “we endeavour, at all times, to cooperate and to assist the various regulatory authorities”.

“We are always mindful of our obligation of confidentiality to our customers, which we believe is one of the bedrock principles upon which the financial sector operate,” it said in statement.

Barita said it was “more than willing to comply with all requests from the commission, provided such requests are made in accordance with the requirements of the relevant governing legislation or pursuant to a court order”.

Both companies have been asked whether they have informed any of the persons listed who may be their customers of the Integrity Commission’s request.

The entities also said they were not aware that the commission had sought the court’s intervention in the matter.

While the Banking Services Act prohibits disclosure of customer information to unauthorised persons or entities, it creates exceptions such as requirement by another law, court orders, or whether it is in the interest of the bank.

The Integrity Commission’s November court action came months after it informed the country in July that two parliamentarians and six public officials were being investigated for illicit enrichment, with a similar number of lawmakers and public officials being referred for prosecution for allegedly providing false information to the IC in their statutory declarations.

It is not clear whether those cases are connected to the requests for Barita and FGB to produce information.

Last December, the United Kingdom-based Privy Council ruled that the Turks and Caicos Integrity Commission only had the power to demand documents from third parties such as banks when formal investigations have been initiated.

The Privy Council, which is the final court of appeal for Jamaica and the Turks and Caicos Islands, said such power did not exist in the normal course of the commission’s functions, such as examining statutory declarations.