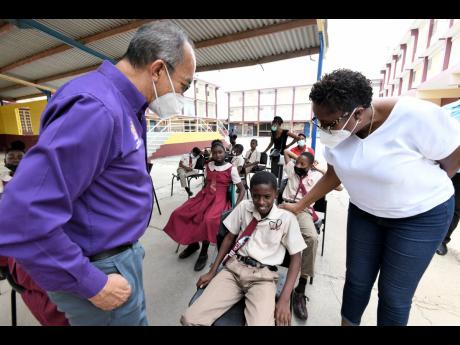 Residents of Greenwich Town have lauded the Government for the physical infrastructure upgrades the community has benefited from, through the build phase of the zone of special operations (ZOSO).

A ZOSO was imposed in July 2020, as the south west St Andrew community was plagued by increased gang activity.

For the first six months of the year, there were seven murders, including two double murders and eight shootings.

JSIF also implemented a solid waste management project valued at $4.1 million, where 26 environmental wardens were trained and employed. One skip was also constructed and placed in the community.

“Significant work has been done on the physical side. We need to improve the work on the social side but have made some inroads in our schools with the birth certificate programme and other projects,” she said.

Fifty-one-year-old Marcia Valentine told The Gleaner that she was fairly pleased with the improvements that have been made.

“The only thing we want is a likkle light on the street. Some streets have light and some don’t have any but the sidewalks are OK, the people come and sweep up the roads in the morning, so it is very clean and the zinc fence dem gone, so di place look nice,” Valentine said.

“Every morning mi wake up, I see the workers sweeping. We have a nice sidewalk can walk pan and we can walk in peace around the community. Everything is just nice since the ZOSO,” he said.

Meanwhile, 45-year-old Marcia Green said the community has a “residential look” since the majority of zinc fences have been removed.

“I like the look. Some of the sidewalks could have been fixed better but we are grateful,” Green said.