Oh, to see royalty in the flesh! 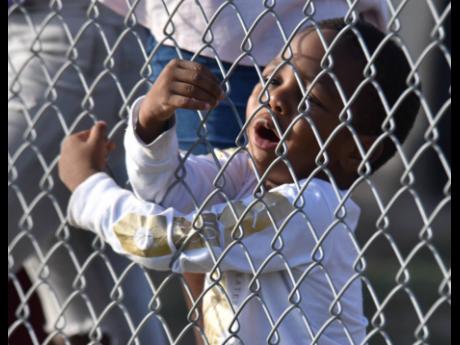 Kenyon Hemans/Photographer
A child tries to get a better view of the Duke and Duchess of Cambridge at the Trench Town football field Tuesday.

Children raced home from school and changed out of their uniforms to witness the Duke and Duchess of Cambridge as hundreds thronged sites in Trench Town on Tuesday.

And Akeera Osbourne exclaimed that after being touched by track and field star Shelly-Ann Fraser-Pryce and footballer wunderkind Leon Bailey, who were also in attendance, she would not wash her hand again.

“Mi think it was exciting ... because a the fuss me a see the Prince,” chimed another child.

Three-time Olympian in women’s bobsled, Jazmine Fenlator-Victorian, a Jamaican-American, revelled in the moment of the royal visit, which coincides with the Queen’s Platinum Jubilee and the 60th year of the island’s political independence. She said it was an opportunity to build on the post-Independence partnership with the British.

“I hope to come from this that they truly dive into the Jamaican culture of where our roots come from and where we want to be as a nation through sport, technology and education,” Fenlator-Victorian said.

His younger brother, Prince Harry, Duke of Sussex, opted for a race with track star Usain Bolt when he visited Jamaica in 2012, but Prince William opted for a friendly game with Kingston College’s Manning Cup football team.

But he made sure to recruit Manchester City footballer Raheem Sterling as the two engaged in occasional drifts and tackles.

Aston Villa and Jamaica star Leon Bailey played alongside KC players but lost to the Prince’s team, who won 1-0.

Pamela Morris-Seivwright, 65, said she was happy to see royalty in the flesh.

The Trench Town local explained that she understood the thrill of the moment, especially among the starstruck children.

“We must feel excited, everybody feel excited,” she remarked, adding that: “It’s a joy to see them come in Trench Town. Them don’t go any other community, but they came here, so we feel special.”