Gunmen slay area don, his brother and a third man 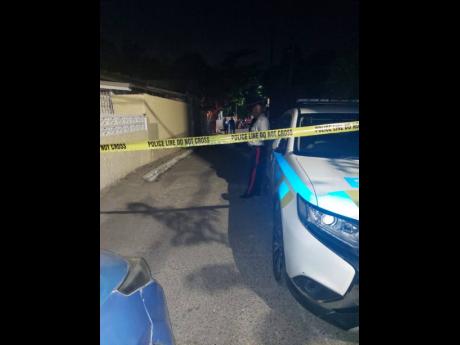 Tensions are running high in Morgan Lane, Grants Pen, St Andrew following the gun killing of the community don, his brother and a third male from the area yesterday afternoon.

The third man who was shot and injured was rushed to hospital but subsequently succumbed.

Reports are that about 5:50 p.m., a car drove on to a cul-de-sac and men alighted and opened fire on a group of men, before leaving the crime scene.

The Gleaner understands that the assailants were wearing masks.

The alleged area don known as Bomsha ‘Bomba’ Miller and his brother identified as ‘Joe’ died on the spot, their bodies fell metres apart.

Cops from the Grants Pen Police Station arrived on the scene quickly. The station is close to the scene of the incident.

The Gleaner further understands that the brother’s mother, Unna Evans, was also murdered in the Grants Pen community in 2007.

Councillor for the Grants Pen Division, Winston Ennis, who is also the deputy mayor for Kingston, visited the scene last evening and told The Gleaner he knew the men well.

“It’s a sad day, very sad day. The two young men who died, I know them and know them well. I know their mother and father, the grandmother and grandfather and the great-grandmother,” Ennis said.

He got the news on his way home from work and quickly came to the scene to try to get an understanding of what transpired.

The councillor said he wished it had not happened and is imploring the Morgan Lane residents to try and see how best they can manage this situation without allowing it to escalate.

“I don’t want any retaliation, allow the police to do their work. I know people are grieving right now, I know their relatives and friends. I know they are hurt but don’t plan any retaliation, don’t allow their emotions to run away with them,” Ennis told The Gleaner.

Ennis said information gathered should be shared with the police and offered sincere condolences to the family of the deceased men.

When our news team arrived at the location, several persons could be heard from a distance weeping and mourning, some in disbelief that the men were cut down in the community.

A heavy police presence was on hand trying to appease the concerns of the residents while giving assurance that a thorough investigation will be done.

The Constant Spring CIB is probing the incident.

Up to March 29, the murder statistics in the St Andrew North Police Division stood at 14 compared with a similar number over the corresponding period last year.

There were four more shootings this year than the 12 recorded in 2021 for the period under review.