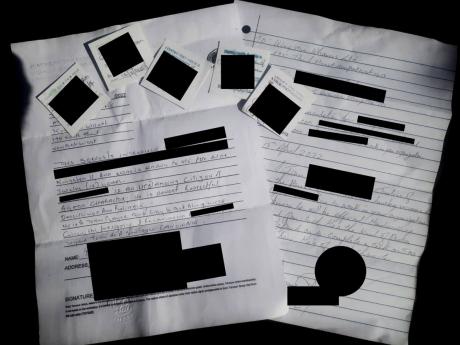 In an undercover probe last week, five JPs in Kingston and St Andrew as well as Portmore, St Catherine, were willing to certify documents without previously meeting a Sunday Gleaner undercover reporter.

It’s a service that’s supposed to be free, but for many Jamaicans finding it difficult to locate a justice of the peace (JP) who knows them well enough to certify documents or write glowing character references, for between $150 and $1,500 on the...

It’s a service that’s supposed to be free, but for many Jamaicans finding it difficult to locate a justice of the peace (JP) who knows them well enough to certify documents or write glowing character references, for between $150 and $1,500 on the streets of the Corporate Area and St Catherine, they can be relieved of the hassle by rogues willing to bend the rules.

In an undercover probe last week, five JPs in Kingston and St Andrew as well as Portmore, St Catherine, were willing to certify documents without previously meeting a Sunday Gleaner undercover reporter.

Payments were labelled as “contributions” by four, who, at times, seemed hesitant to collect the cash when offered.

But for one JP in the heart of the capital city, citizens are left with no doubt as to what is required to get that highly sought-after seal on their documents.

‘Clients’ line up and are ushered into a waiting room, where they are shown a price list after consultation with a male secretary. To have a passport-size photograph certified, they have to shell out $500. A stamp of attestation for other documents attract a fee of $1,000.

The fees are non-negotiable, the secretary said matter-of-factly last Thursday, showing this reporter a clipboard with the price list.

The only requirement is that customers have an ID ready. Business hours are between 10 a.m. and 5 p.m. and receipts are issued after money changes hands.

Then, it is off to see the JP next door, who signed a passport-size picture and wrote a job recommendation letter for this reporter in no time. No questions asked.

It did not matter that he had never met this ‘client’ before. Neither would he be detained by the Justices of the Peace Act (2018), under which he can be fined $500,000 or imprisoned for up to three years for making a false declaration.

Without lifting his head, the JP waxed eloquently to the future employers.

“This serves to introduce Corey Robinson of ... who is known to me for twelve years,” the JP wrote.

“Mr Robinson is an outstanding citizen of good character. He is honest, respectful, disciplined and reliable. He is a team player and is easy to get along with.

“Given the foregoing, I recommend Mr Robinson to your team as a suitable candidate,” he advocated, signing the letter and affixing his official seal.

Earlier, a $1,000 fee to have a document signed jolted one 25-year-old in the waiting room.

“Little most me turn back a while ago, but is because me need it,” he said, taking a seat beside this reporter.

“It used to be $500 about three years ago, when me use to live near the place. I never know is here it reached now,” he continued, face tight with discontent.

The $1,000, he said, was budgeted to pay the JP and for bus fare for the day. Now, he rued his mother’s usual pronouncements about paying the public servants.

“She would curse and tell me that them not supposed to charge any at all. She not paying it. She would search for another one,” he said, as the conversation was interrupted with this reporter being summoned into the JP’s presence.

But even finding another JP to verify documents might not be an easy task. Two weeks ago, Justice Minister Delroy Chuck, under whose portfolio the nation’s JPs are commissioned to serve, revealed that his ministry has been unable to locate more than 4,000 of the island’s 9,600 JPs.

“In this audit of the 9,600 justices of the peace that we are aware of across Jamaica, only just over 5,000 have reported. Somehow we don’t seem to be able to find the other 4,000,” he said of the ministry’s efforts, adding that there was no data to indicate whether they had migrated overseas or to another parish or if they had died.

“If we can’t find them, we are going to assume that they don’t exist. We are just going to remove them from the roll ... ,” he added.

The JPs Act give custodes the authority to remove from the roll those who have not replied within two months to any registered post sent to their address on file enquiring whether they have ceased to act as a justice or changed their address and if their whereabouts remain uncertain after reasonable efforts have been made to locate them.

Last week, one other justice was visited by this reporter in downtown Kingston, along with two in Portmore, St Catherine; and another in Papine, St Andrew.

With ID verification, all signed the photographs. Two offered recommendation letters, while three declined, noting that this reporter was unfamiliar to them.

Only the aforementioned JP openly charged for services and gave a receipt. One declined a contribution, while three others accepted monies, ranging from $150 to $500.

“For a reference, you have to know the person by character; not by personality. Personality changes with each situation, but character is you,” lectured one JP outside the downtown Kingston tax office.

“I have to know you for a while, because if I do one for you, I am going to lie, don’t it? You can give me $40,000 to lie?” he said jeeringly, noting that dishonesty was outside his character.

He then declined to write a job recommendation, but pointed to his male assistant beside him for the collection of a $150 contribution for his time.

‘JP WORK IS NOT PAY WORK’

“So why don’t you ask someone in the community you were living before to write it?” probed a female JP at a plaza in Naggo Head, Portmore, where this reporter was among seven people waiting for her in the sweltering morning sun.

“I can sign the picture, but I can’t write the recommendation. I don’t know you!” the woman stressed, her tone pained over wanting to help.

When offered payment, she retorted bluntly: “No! JP work is not pay work!”

Her Greater Portmore male counterpart was even more sceptical as he entertained this reporter at his home.

In a conversation that probed this client’s background, past employment and experiences, he recalled being duped by a friend seeking his approval for the sale of a car owned by the friend and a spouse.

Luckily, he said, he was prudent enough to contact the spouse, who informed him there was no agreement to sell the vehicle, and that any interaction between her and the spouse must be through her lawyer.

“This was my good friend! Not like you, who I know nothing about,” he said. “So there are many situations like this, where you have to be careful of even people close to you. It is simply not worth the trouble,” he said, pointing to his credentials on display on his verandah.

Still, he declined to write the recommendation, and reluctantly accepted a $500 payment for signing the photos.

“We call it a contribution, but it is really up to you whether or not you want to leave it,” he emphasised.

In Constant Spring, one JP, admittedly moved by this reporter’s plea for assistance, wrote a job recommendation after some hesitation. He, too, wrote favourably of this reporter, whom he had never met previously.

“In my opinion, he will be efficient, hard-working, innovative, and punctual. He is the kind of person who you can depend on to complete a task on time. Please assist him, he is of good character,” he wrote.

He did not charge for his services, but accepted a $500 ‘contribution’ for his time.

With obvious sincerity, he said: “I really hope you get the job.”