… but access to public beaches in St James a contentious issue 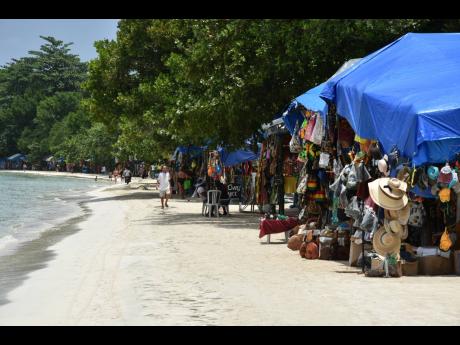 Photo by Mark Titus
Vendors plying their wares along the section of Seven-Mile Beach in Negril known as Bloody Bay. 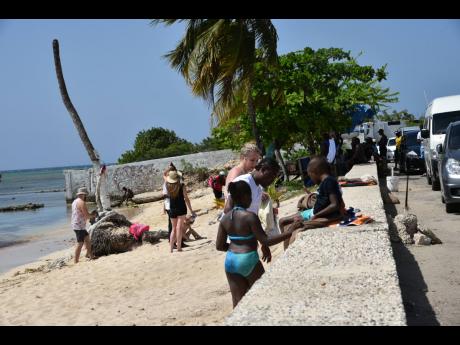 Photo by Mark Titus
Dead End Buccaneer Beach is considered the only real option for beach lovers in Montego Bay, but the facility is inadequate.
1
2

While Jamaicans continue to enjoy full access to the popular Seven-Mile Beach in Negril, vendors claim reports have been circulating about a plan to stop them from selling on the popular waterfront by next year.

But president of the Negril Chamber of Commerce, Richard Wallace, has denied the claims, even as he appeals for all stakeholders to play their part in protecting the popular destination.

“I am not aware of such a plan. That is news to me,” Wallace said on Friday. “Jamaicans have a right to the beach, and based on what I am seeing now, it is open access for everyone, including a lot of undesirables.”

The seven-mile stretch, which spans the parishes of Westmoreland and Hanover, boasts an array of the world’s finest in hospitality, as well as a raft of bed and breakfast operations along the picturesque coastline.

But Cameron Dyer, a third-generation vendor, who sells handicraft items in the vicinity of the all-inclusive properties in an area called Bloody Bay, says the rumour has caused anxiety among the sellers.

“We heard that we will have to leave the area soon, but we strongly object to any move to get us off the beach, because this has been our bread and butter for many generations,” he told The Sunday Gleaner.

“Selling on Negril Beach started from my great-grandparents and it schooled all of us. This is where I spent all my days as a child,” Dyer added. “Our greatest fear in Negril is that we will soon be like Montego Bay that no longer has a beach for the people, and the public is suffering.”

Harmony Beach Park is a welcome addition to the Montego Bay, St James, landscape. The facility was developed at a cost of $1.3 billion. Among the amenities of the 16-acre park are 132 parking spaces, restroom facilities, children’s play areas, a jogging trail, a promenade along the beach, a multipurpose court, and a designated beach volleyball area.

Access to the facility is free, but is only open to the public from Wednesday to Sunday. The public is charged for parking, as well as beach chairs and umbrellas.

“Harmony (Beach Park) is a good look for the city, but it should be that the public comes to use the beach when they want to,” Montego Bay resident and educator Cecil Martin told The Sunday Gleaner. “Our only option is Dead End Beach, which is inadequate, and the parish council did the people of St James an injustice when they sold Cornwall Beach.”

The Cornwall Beach facility was controversially leased to Decameron All-inclusive Hotel and Resorts in 2015.

At the time, chairman of the then St James Parish Council, Glendon Harris, said that the public would still have paid access to the facility. When The Sunday Gleaner team visited the location last week, there was a sign advising of the cost to access the beach, but the security on duty said no such arrangement exists.

Acting Mayor of Montego Bay Richard Vernon said the Cornwall Beach deal took place before his time, but Harris, one of the signatories to the 36-year lease agreement, said that refusing the public entry to the facility is a breach of contract.

“The vulgarity of the taking over of Cornwall Beach was an embarrassment for the People’s National Party government. People in my age group would have a historical connection to Cornwall Beach, so the leasing of the facility to the big guys is still of serious concern,” popular social commentator and community activist O. Dave Allen said yesterday.

However, Harris maintains that the deal has long-term benefits for the residents of St James.

“After the life of the contract, the hotel will be owned by the people of St James, so yes, it is a good deal, but if the public is not being allowed, then that is a breach of contract because that was a part of the deal we signed,” the former mayor insisted.