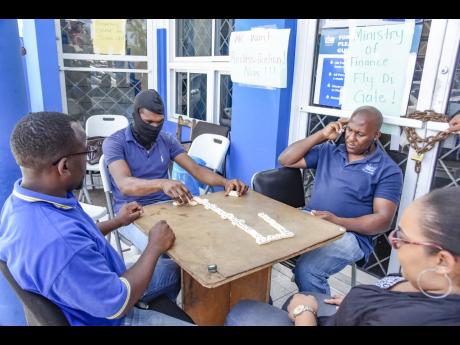 Nicholas Nunes/Photographer
With the entrance door locked and placards posted, NWC workers at Leaders Plaza in Mandeville play a game of dominoes during strike action on Tuesday. 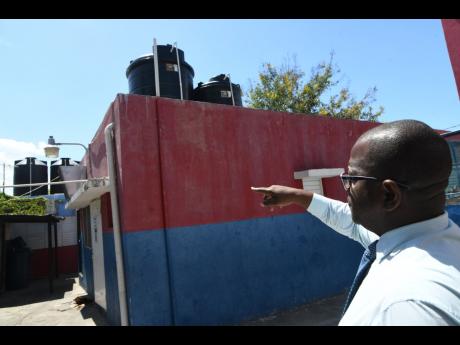 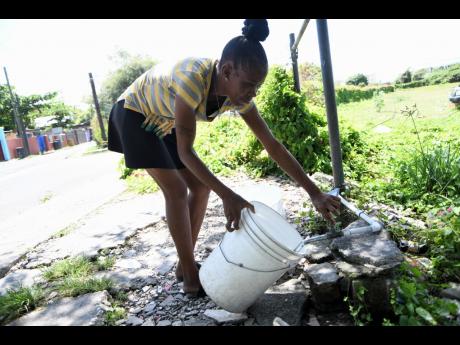 Rudolph Brown/Photographer
A resident of Arnett Gardens in southern St Andrew catches water from a standpipe on Greenwich Street on Tuesday.
1
2
3

THE islandwide water lock-off spurred by industrial action at the National Water Commission (NWC) has resulted in the loss of millions of dollars at the state-run entity with unions and the Government still at the negotiation table late into Tuesday night.

The protests may also cost taxpayers hundreds of thousands of dollars as hospitals have been instructed to source the commodity privately if the stalemate continues.

Kingston Public Hospital (KPH), the island’s premier health facility, had used up 40 per cent of its two-day water supply only hours after NWC workers walked off the job, while the National Chest Hospital in eastern St Andrew was said to be running low.

Despite this, Errol Greene, regional director for the South East Regional Health Authority (SERHA), said that hospitals and clinics were, so far, faring well.

SERHA is responsible for the delivery of healthcare services to St Catherine, St Thomas, Kingston, and St Andrew, covering 47 per cent of the population.

“I have given instructions to the CEOs and the parish managers to make arrangements to have water privately trucked to institutions. If they have to, then that is what they should do,” Greene said in a Gleaner interview on Tuesday.

“The other hospitals are stable for now. St Catherine seems to be holding up and Princess Margaret and the health centres are also holding up. I’ve asked the parish managers to ensure that they secure the supplies at the clinics because once the water supply in the area goes, then people naturally go to the clinic to help themselves to whatever is there,” he added.

Greene was unable to indicate just how much the undertaking was likely to cost, though checks by The Gleaner revealed that a single delivery could cost, at minimum, between $30,000 and $80,000 in the Corporate Area and between $45,000 and $112,000 in Montego Bay, depending on the size of the truck.

NWC President Mark Barnett told The Gleaner that the industrial action has, so far, cost the agency in the region of tens of millions of dollars in direct income.

“Any disruption in service where customers don’t have the service is a major blow to my revenue. It will affect my ability to provide the service that will allow me to collect. In the same breath, employees are expecting to get their pay at the end of the period, fortnightly or the month,” Barnett said.

“This is going to affect everything. Any single time that I lose a day of collection, I’m losing anywhere upwards of $50 million.”

More than 2,000 NWC workers protested over an outstanding reclassification exercise as well as the ongoing public-sector compensation review.

The reclassification exercise has been unsettled since 2008.

More than 1,000 NWC facilities have been affected as a result, including major infrastructures serving the country’s key urban centres.

Barnett said that he was blindsided by the industrial action, which forced some schools shut and caused several businesses to discontinue operations for the day.

The years-long challenges at the NWC have forced some businesses to go it alone, with Thalia Lyn, founder of restaurant chain Island Grill, confirming that she had long ditched the entity for privately supplied water.

“We have been doing it all along... . We’ve put in extra storage and we’ve always had extra storage. We have a regular supplier who delivers water to us. We have not found that the National Water Commission is reliable,” Lyn said.

Similarly, chairman and CEO of Continental Baking Company, Butch Hendrickson, told The Gleaner that inconsistent water supply forced his company to sink its own well eight years ago at a cost of $46 million.

“So we actually have our own supply and we have our treatment plant on site and our own reverse osmosis system. We had to make that decision, not because of industrial action, but because every year we had a problem with drought and water lock-offs,” he said.