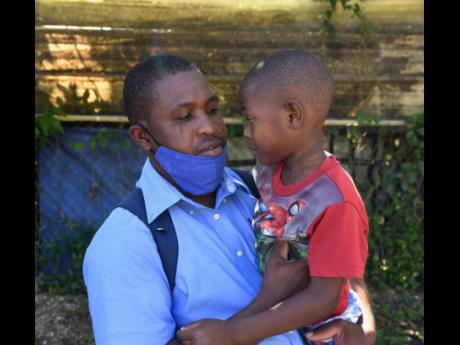 Ashley Anguin/Photographer
Jason Bryan Sr holds five-year-old son, Jeremiah, in Gutters, St James, on Tuesday. Eleven-year-old Jason Bryan Jr, the elder brother, was mowed down by a car on Mother’s Day in the community. He succumbed to his injuries at hospital on Monday. 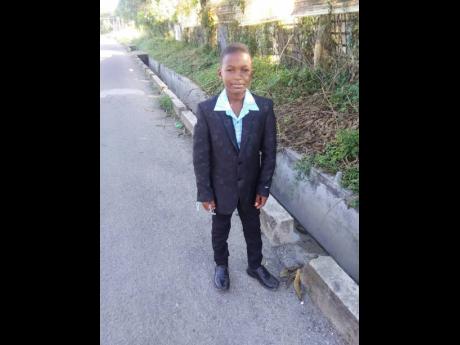 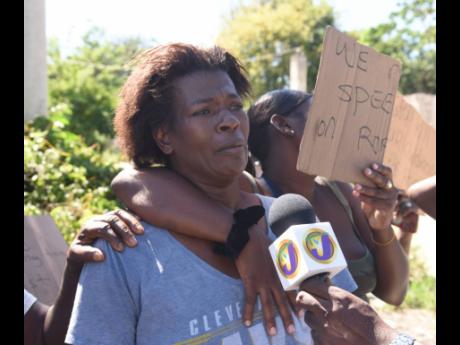 Jason was hit by a car on Mother’s Day, a day earlier, in Gutters, St James.

According to residents, the child was sent to a nearby shop to purchase items and while returning home, he was hit by a car about 5:30 p.m.

Jason Bryan Sr, father of the 11-year-old, told The Gleaner that he was crushed by the incident.

Young Jason was his firstborn and had a passion for playing the drums and singing. He wanted to become a musician like his uncle.

“He was a Christian youth because we bring him God way. Him say, ‘Daddy, you know mi want to baptise,’ and mi never stop him’,” said Bryan Sr. “One day I will see him again because he belongs to God.”

He has called for the installation of community speed bumps.

“It is not the first time a little one is getting hit in the community. Too much speeding going on around here,” Bryan Sr lamented.

The death of the fifth-grade student of Barracks Road Primary has left his teacher and classmates devastated.

Kadian Smith, his teacher, was near to tears as she described the 11-year-old as a quiet student.

“It just hit me just seeing that his bench was empty. I just marked his test paper and I can’t believe this really happened. I am going to miss him dearly and there is going to be a void in the classroom that can never be filled,” Smith told The Gleaner.

The primary-school student was said to have socialised well with his peers, who were reportedly not coping well, Smith added.

Jason’s death triggered a protest in Gutters on Tuesday.

The militant demonstrators demanded action from the authorities to prevent a repeat of the tragedy.

According to a resident, to date, at least five children and three adults have been victims of accidents in the same area.

“From I’ve been living here, speeding is a problem. We are asking for something on the road just to slow down the speeding. And we are begging for a sign down there to say ‘slow down zone’,” the resident told The Gleaner.

While standing in solidarity with the residents, Michael Troupe, councillor for the Granville division, said he would seeking to have speed bumps or other measures installed.

“It cannot be that every three months you have motorists driving at such a speed and causing mayhem in this community. Something has to be done,” Troupe said.

One hundred and fifty-nine persons have been killed in 140 fatal crashes since the start of the year, representing a five per cent decline in both indices compared with 2021 data.

There have been four deaths of persons aged 0-19 in 2022, compared to seven for the corresponding period in 2021.