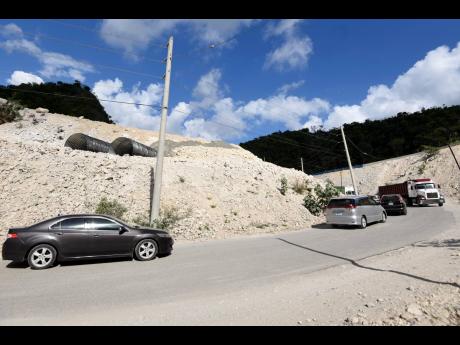 Kenyon Hemans/Photographer
Motorists navigate one of the curves along the Grants Pen main road in St Thomas on January 27 this year. The South Coast Highway Improvement Project is expected to open new frontiers of investment and development in St Thomas and Portland.

Emaar Properties, a multinational real estate development company in the United Arab Emirates, is in discussions with Jamaica’s Ministry of Tourism and is eyeing St Thomas and Portland for potential hotel projects.

Tourism Minister Edmund Bartlett, who is in Dubai attending the Middle East and North Africa (MENA) trade show for tourism, made the revelation on Monday, hours into the three-day event.

Kingston is critically being considered as a hub for a mega GCC (Gulf Cooperation Council) aircraft, said Bartlett, and Emaar – the largest hospitality investment group in the Middle East – has shown interest in areas of the island that are ripe for investments.

St Thomas is likely to become the new frontier for an industry expected to welcome 3.2 million visitors at the end of 2022.

Bartlett has been touting the potential of the eastern Jamaica parish since delivering his Budget presentation earlier this year.

The buildout of the multibillion-dollar South Coast Highway Improvement Project is viewed as a game-changing development that will allow for major commercial investments.

Bartlett said he would be meeting with five of the largest airlines in the world, including Etihad, Emirates, Saudia, Qatar, and Royal Jordanian, which he said will give the region coverage that could open up new lines of investment in Jamaica and the wider Caribbean.

“The three largest gateways of the world are located in this area for aviation. That’s Doha, Qatar, Riyadh, Jeddah, Saudi Arabia and, of course, Dubai,” he stated.

On Day One of the show, Bartlett and Director of Tourism Donovan White met with DP Ports, hoping to strengthen homeporting of small luxury cruise lines.

“This engagement in the Arabian travel market is loaded with potential to expand and improve trade connections in the Middle East’s travel industry, as well as diversify the promotion of Destination Jamaica,” the minister said.

This is Jamaica’s debut at the trade show and attendance at the event comes on the heels of Bartlett’s most recent visit to the Middle East to facilitate high-level engagements in February.