Doyenne of radio and theatre hailed in death 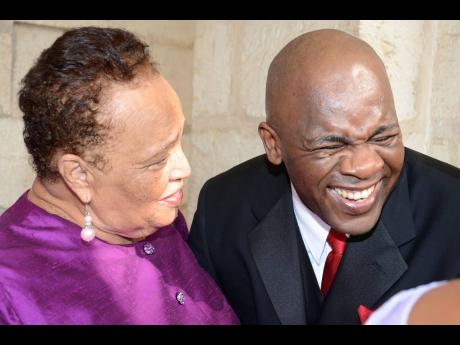 File
Barbara Gloudon draws a grin from Floyd Morris after his wedding ceremony at the University Chapel in Mona, St Andrew, on July 3, 2011. 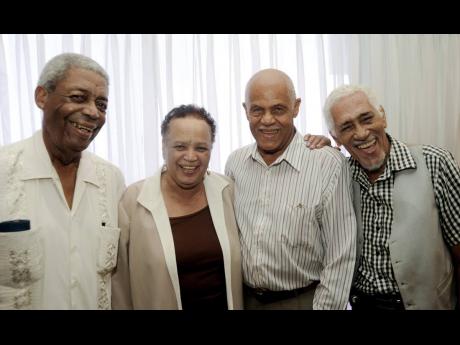 File
Barbara Gloudon has a light moment with media veterans (from left) Ken Allen, Ken Chaplin, and Junior Dowie at The Jamaica Pegasus in 2010. All four have now passed. 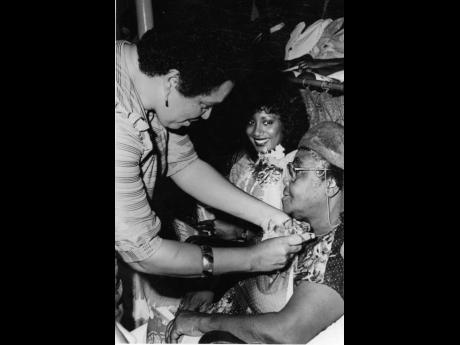 File
Barbara Gloudon, chairman of the Little Theatre Movement, pins a corsage on Gloria Dehring at the 100th performance of the LTM Pantomime ‘Tantaloo’ in 1983. Looking on is Mrs Alistair McBeath, wife of the CEO of the Carreras Group of Companies, which treated its employees. 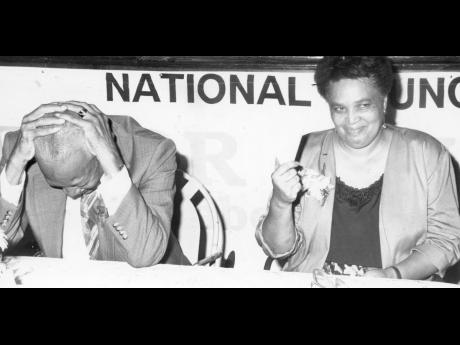 Barbara Gloudon, whose sharp wit and listening ear endeared her to radioland for decades and whose theatrical genius brought colour to the National Pantomime, died late Wednesday.

Her passing at hospital, aged 87, capped a sterling career spanning six decades and followed the death of her husband Ancile, a noted horticulturalist and food technologist, less than a fortnight ago.

Gloudon is survived by daughters Lisa and Anya, son Jason, and two grandchildren.

A curator of Jamaican culture, it was as host of Radio Jamaica’s flagship daytime talk show Hotline that Gloudon became a dominant force in broadcast journalism, attracting a huge following with her folksy delivery and wit, coupled with the empathy she exuded in her interaction with callers.

Even though she did not reprise the bombastic role play that became increasingly popular in evolving talk radio, she was no shrinking violet.

Fresh out of Northern Caribbean University in 2008, Dannie Clarke’s first job in media was as Hotline producer.

Clarke got a baptism of fire as the victim of Gloudon’s crisp candour which, at first, filled her with trepidation but later morphed into respect for a mentor.

Her rude awakening was at an outside broadcast in Ocho Rios, St Ann, at a workshop for teachers. The entire hallway, she recalled, was full of people.

“She was just so difficult. She was saying to me she’s not doing that interview. ... Then she said, ‘You’re not a producer! I will make you into a producer!’ and I went outside and I called my mother, and I said, ‘Mommy, mi nah do this,’” Clarke, who stayed in the job for seven and a half years, said in a Gleaner interview Thursday.

“What I got to understand from Mrs Gloudon is this: She’s not threatened by anybody . ... You have to earn her respect,” added Clarke, while reminiscing about the crystal-laden orchid bouquet Gloudon gifted her for her wedding.

Derrick Wilks, senior producer at the RJR Communications Group, who worked closely with Clarke and Gloudon over the years, remembers the late talk-show host for “giving a voice to the voiceless” and loving Jamaica and its people.

“Barbara was larger than life. Barbara was the Hotline for quite a while. In fact, there was a period when she carried the show all around, Monday through Friday,” Wilks said.

“She defined talk radio to the point where she wasn’t the sit-in-the-studio, talk-around-the-microphone type of person. Her ears were always attuned to the streets, and so whenever there was something going on, Barbara would be in the thick of things,” Wilks told The Gleaner.

Wyvolyn Gager, former editor-in-chief at The Gleaner, and Desmond Richards, a former president of the Press Association of Jamaica and editor of the now-defunct Herald newspaper, hailed the late journalist as a pioneer of the profession.

Gloudon was in her sunset years of editorship in a near three-decade career at The Gleaner when Gager was hired in 1975 but left an impression that has lasted till today.

“Barbara was one of the few women who had a leadership role in media. It sent a signal to the rest of us that we could find a seat at the leadership table even though there were so many men in the field,” she said.

Richards praised the leadership skills of Gloudon, especially in the early 2000s while he served as president.

“She was a pioneer and fighter for press freedom in the Caribbean and globally. She was passionate for the truth and a journalist that sought to protect the rights of the masses,” Richards said.

Born in Malvern, St Elizabeth, in 1935, to Vivian and Doris Goodison, Barbara Joy Gloudon attended St George’s Elementary and St Andrew High. She was also associate fellow at the University of Iowa.

Gloudon cut her teeth in journalism at The Gleaner, where she began her professional life in 1951. She rose through the ranks from reporter and subeditor to author of the popular column ‘Stella Seh’ before assuming more senior roles as features editor and editor of THE STAR.

After departing the Old Lady of North Street in 1978, Gloudon served a three-year stint as deputy director of tourism.

Gloudon remained a mainstay of talk radio for 28 years, jostling with rivals in an increasingly competitive sector that saw a mushrooming of stations across the country. She retired in March 2015.

She also penned a column in the Observer and wrote radio plays, the most successful of which was the long-running Wrong Move, which aired on RJR.

Gloudon was inducted into the Order of Jamaica in 1992 and was awarded an honorary Doctor of Letters by The University of the West Indies 11 years later.

One of the first recipients of the Press Association of Jamaica’s National Journalism Awards in 1963, she was inducted into its Hall of Fame in 2013. The association presented her with a Lifetime Achievement Award two years later.

PAJ President George Davis said she was a defining voice in Jamaican media and exposed issues of concern to ordinary folk.

And Gary Allen, CEO of the RJRGLEANER Group, said Gloudon was not only a stalwart and icon of journalism, but also a friend.

“She was generous with her knowledge and always had suggestions on various areas of how to make what we do in media and our group better,” Allen said in a statement.

Described as a cradle Anglican by Archbishop of the West Indies, the Most Rev Dr Howard Gregory, Gloudon served as a communications consultant to the diocese for four decades and was editor of The Jamaica Churchman for more than 30 years.

She also produced and hosted the weekly Anglican programme Think on These Things on RJR.

Gloudon was a lay reader and member of the St Joseph’s Grove Church in Gordon Town, St Andrew.

The archbishop said she was a pillar of support for the denomination.

“Her impact and deep concern for a society in which long-established values are being discarded are testimony to her strong Christian witness,” Gregory said.

Doreen King, who auditioned as a singer and made her debut in theatre arts playing the character ‘Charity’ in the 1990 pantomime Fifty-50, recalled how Gloudon shaped her career and personal life, so much so that she had been present at King’s mother’s funeral some years ago.

“She was so good to us. I mean, we called her our mother. What more could I say?” King said in a Gleaner interview Thursday.

Brian Heap, past director of Little Theatre Pantomimes and former head of the Philip Sherlock Centre for the Creative Arts at The UWI, expressed a deep sense of sorrow for a friend of many decades.

He first met Gloudon in 1981, playing the lead character Captain Jack Rackham, or Calico Jack, in the pantomime The Pirate Princess, which Gloudon wrote.

Their partnership grew, with Heap directing 15 pantomimes written by Gloudon, including Trash and River Mumma and the Golden Table.

Acknowledging that they did not always see eye to eye, Heap said that Gloudon’s talent and passion for theatre infused her scripts.

Heap said that Gloudon was a perfectionist - a trait that stood out in his recollection of her ripping up a 15-page script she deemed subpar.

“She understood writing for the theatre in a way that very few people do,” he said in a Gleaner interview Thursday.

Anya Gloudon-Nelson, the youngest of Gloudon’s three children, recalled the wild ride growing up with a parent who was always in the public eye.

“I’d travel up and down the country with her, holding handbag and later driving her to many speaking engagements, and the outpouring of love and respect that they had for her and she had for them in return is what makes me smile through all this,” said Anya.

As her parents aged and relied on assistance, Anya said she and her siblings adjusted to the change of fortunes.

“We are a light-hearted family, so we made many jokes of how the tables turned. It’s a challenge, but we had many good memories, and it will keep us,” Anya said.