Heroes saluted as search called off for Beryl Walters 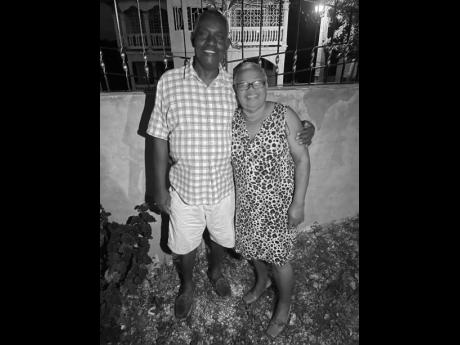 File
Beryl (right) and Berris Walters, who were married for 52 years.

The St James Municipal Corporation (StJMC) has officially called off its search for 68-year-old Beryl Walters, who was washed away during flood rains in the Westgate area of Montego Bay last month.

Montego Bay Deputy Mayor Richard Vernon made the announcement at Thursday’s monthly meeting of the StJMC, where awards for heroism were presented to Clayvian Williams and Horatio Campbell, who helped to rescue Walters’ husband and daughter from the Montego River during the tragic incident.

During the brief and bittersweet presentation, Vernon said that the StJMC decided to end its search on Wednesday, 21 days after Walters, her husband, daughter, and 12-year-old granddaughter Jennel were swept away in their family car on April 19.

Vernon said that he contacted the family to inform them of the decision arrived at during Wednesday morning’s meeting involving representatives of the agencies involved in the search effort.

“We have searched from the shoreline at the Half Moon area, all the way to Hopewell, Hanover, and we have used heavy equipment, divers, and boats in the search,” Vernon added. “A missing persons’ report was filed by the family, and, therefore, the police will have to continue pursuing the matter. For now, it is sad, but the reality is that we had to bring all the joint efforts to a halt.”

Speaking to The Gleaner after receiving his award, Williams admitted to having mixed feelings about the circumstances that led to his and Campbell’s recognition on Thursday.

“It was a good thing because you have a whole heap of people like me who do stuff like that anybody never recognised them, so it is a good feeling to know they called me and gave me the award. But even when I was collecting it, I felt bad for the lady and for the family to know they never found her, and it was an unfortunate event,” he said.