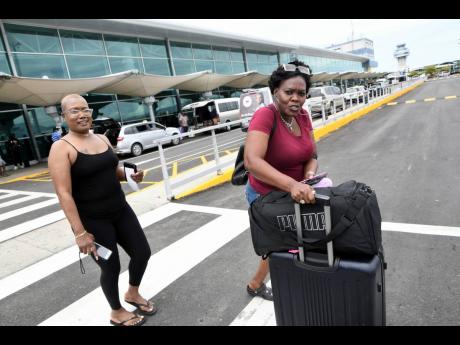 His plea came in the midst of a withdrawal of services by air traffic controllers at Jamaica’s main airports in Kingston and Montego Bay, which caused dozens of flight cancellations that threatened a resurgent tourism industry. Staffers resumed work in the evening.

Holness also had an eye on a brewing storm as the trade union representing civil servants delivered a 72-hour strike notice a day after the Government nudged National Water Commission employees back to work after turning off valves and leaving 500,000 customers with dry taps.

The Government is banking heavily on the cooperation of trade unions representing public-sector workers to stave off further industrial action and restore stability to the economy.

“Let us just work as one country with one vision instead of ripping our society apart unnecessarily,” said Holness while addressing the ceremonial installation of Ian Forbes as custos of St Andrew on Thursday.

Drawing on much of the content and theme of his address to a ministry retreat a day earlier, Holness cited the strong relationship the Government had developed with trade unions after punishing years of fiscal austerity.

He urged unions to resolve conflicts by utilising the tools and timelines that govern labour negotiations.

“When we were teetering on the edge of bankruptcy as a country; when we had to undertake several structural reforms in our finances; when we entrenched fiscal discipline, it was done with the support of the unions as stakeholders and partners in that decision,” the prime minister reminded his audience.

Holness said that the Cabinet anticipated some pushback to its efforts to implement the long overdue exercise to revamp the civil service, anchored on reclassification, realignment, and restructuring to streamline and simplify dozens of pay scales that complicated fiscal management.

Insisting that systemic overhaul was necessary and would not be derailed, Holness emphasised that no group of workers would be worse off, relative to each other, after the reclassification exercise.

“The objective is to ensure that labour in general and labour in particular in the public service gets their fair share of the prosperity that the country is and will be experiencing in the future. This is not to make anybody worse,” he declared.

Framing the multiplicity of modern disputes within a century of fractious labour relations, Holness said that he believes that the country had matured from the 1930s worker revolts that caused national upheaval.

Alluding to mass industrial action as illogical, the prime minister said, “It doesn’t make sense for us to kick over our own pail of milk.”

“There is no secret reserve of resources that if the planes stop flying, tourists stop coming, our hospitals are shut down and our schools stop teaching that somewhere we can just go and take it up and present it,” he said.