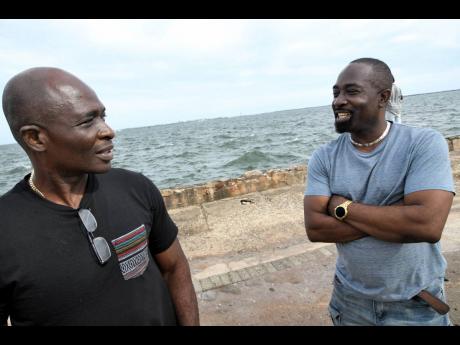 Lescene Edwards still has nightmares despite having his murder conviction overturned by the London-based Privy Council last month. He had served nine years of a life sentence at the Tower Street Adult Correctional Centre before the court determined...

Lescene Edwards still has nightmares despite having his murder conviction overturned by the London-based Privy Council last month.

He had served nine years of a life sentence at the Tower Street Adult Correctional Centre before the court determined that his conviction should be quashed.

Much of that time was spent in a confined space with two other prisoners under lockdowns as long as 17 hours.

Bathroom breaks were taken in plastic bags in the company of his cellmates and stored in the same space until lockdowns ended.

For food, it was the customary steamed cabbage and bread or rice, bread and butter, or stewed chicken back and rice and peas.

But safety was Edward’s biggest concern.

For the first few months, he had to be escorted to and from his cell.

“The man dem seh, ‘If we ever catch you, we blood you,’” Edwards recalled during a Gleaner at the Kingston waterfront, only a short distance from where he had been imprisoned.

For much of his life, he had been on the right side of the law, working six years as a correctional officer at the same prison then eight years as a police constable in the technical division of the Jamaica Constabulary Force’s (JCF) Scene of Crime Unit.

But all that changed when the mother of his twin girls who had, a month earlier, got married to her overseas-based partner, was found dead at her Pembroke Hall home in St Andrew.

Edwards, who was also present at the home, said that he was awakened by an explosion.

He said that he subsequently discovered the body of 23-year-old Aldonna Harris-Vasquez, with whom he had still maintained an intimate relationship, in the bathroom of the house with a gun in her lap.

A suicide note was also found.

Edwards was arrested and charged for the murder but tried some 10 years later.

Prosecutors argued that Edwads murdered Harris-Vasquez and then staged the scene to give the appearance that the university student had committed suicide.

The ex-constable, who is now 53, was sentenced in November 2013 to life imprisonment and ordered to serve 35 years before he could be eligible for parole.

The Court of Appeal dismissed his appeal in 2019 and ordered instead that he serve 20 years before parole.

“I still have nightmares. Sometimes I end up pinching myself, wondering if I’m in a dream because the trauma that I went through in prison was too much. I still have some psychological challenges,” Edwards said.

“The living condition was terrible – inhumane, I would say – even for a guilty person,” he added, saying that the transition from custodian of prisoners to an inmate himself was jarring.

But after months of feeling sorry for himself, the former constable decided that he would have to command respect from his fellow inmates.

He said he first earned the trust of his cellmates because they believed he was decent and innocent.

Eight of the 10 students taught in his last batch before his April 4 release from prison were successful in their mathematics exams, Edwards told The Gleaner.

It was through those fostered relationships that Edwards learnt of the Simon Moorhead and Burke law firm in England.

“I knew that I was innocent. I knew I had children on the outside and needed to continue being a part of their lives. I had to fight for them,” the father of six said.

Resolute, he decided that his only way out of lockup was through the Privy Council, but he did not have the millions to take his case there.

Edwards said that he reached out to the firm shortly after he lost the 2019 appeal and was told to send an email detailing his case.

Within three weeks, the firm responded, confirming that it would represent him pro bono.

Overjoyed, Edwards contacted his brother Ian, who he described as his backbone on the outside, to share the news.

The firm would also provided experts and a barrister free of cost.

The Privy Council, in its decision published on April 4, not only found that a “substantial miscarriage of justice” had occurred but that the decade-long delay in taking the case to trial had breached Edwards’ constitutional right to a fair trial within reasonable time.

“We were taught at training school to be truthful as one of the attributes to being a good constable. I was disappointed in the way the investigation went. I don’t blame the Force itself, just some individuals who had agendas,” the former cop said.

The local courts, however, do not enjoy his confidence, with Edwards insisting that the Privy Council must remain the country’s final appellate court.

“I don’t believe that a prisoner who does not have the financial capacity will be able to find a law firm in the Caribbean that he can take up the phone and call and they represent them for free. Not even in Jamaica,” he said.

“We as Jamaicans should not just jump on a bandwagon and get rid of the Privy Council. Justice has no colour or boundary. They don’t know anyone out here or have any connections. They don’t have any bias. In the Caribbean you will find bias.”