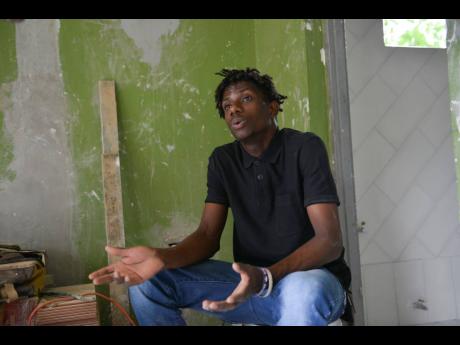 Ricardo Makyn/Chief Photo Editor
Twenty-two-year-old tiler Gawain Murray speaks of his passion for home-improvement projects in an interview with The Gleaner yesterday. 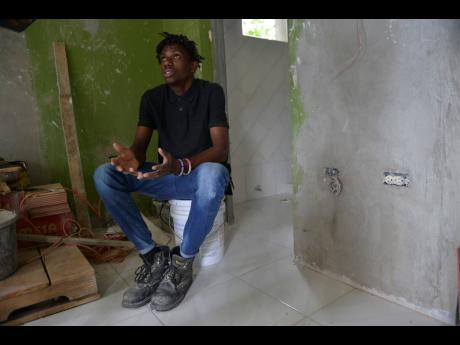 Ricardo Makyn/Cheif Photo Editor
Twenty-two-year-old tiler Gawain Murray speaks of his passion for home-improvement projects in an interview with The Gleaner yesterday. 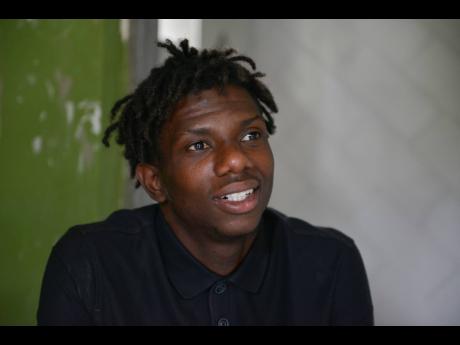 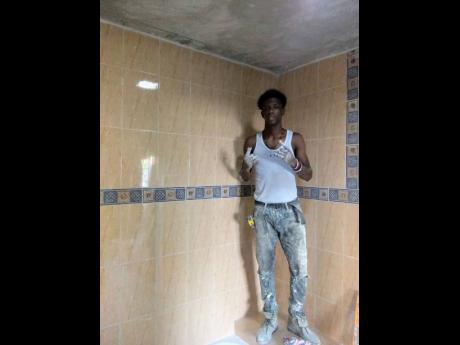 Contributed
A proud Gawain Murray poses in front of one of his tiling projects.
1
2
3
4

Gawain Murray had been dreaming of building his own house from the ground up since he was 11 years old and this motivation steered him to pursue a career in construction.

Murray grew up in humble beginnings with his three siblings and parents in Rockfort, Kingston. There, he learned the importance of separating oneself from the stigma attached to living in the ghetto.

At 13, he moved to Sirgany, a nearby community located off Windward Road, and despite his time there being bittersweet, Murray said that the amazing experiences outweighed the low moments.

“I am just glad that I’m a part of a family where them put a lot of effort in raising their kids right,”he told The Gleaner yesterday. “I grew up understanding these morals and it become part of me – even putting it within business makes you a strong human being overall.”

Despite the bad influences within the community, he realised from early that it was imperative for him to stay on a path that would guarantee success.

“People won’t see it until you do it,” is a mantra the now-22-year-old holds dear, noting that with strong determination, one can rise and prove naysayers wrong.

After struggling to successfully land a job after leaving Kingston College and being unable to afford tertiary education, he took the first steps on his construction journey with the help of some KC old boys, who got him a job in the construction sector at age 17, despite having no prior experience.

He later met tradesman Devon Lynch, who took him under his experienced wings as an apprentice tiler.

The young lad gladly absorbed the many tips and tricks to sharpen his skills.

“Out of everybody that I’ve worked with, he’s one of the most elite builders that I’ve ever seen so I stick closely around him,” Murray said of his mentor.

And though he would only get paid $8,000 fortnightly, Murray was in it for the long haul.

Today, those lessons have greatly helped him to start his own business, which allows him to earn more.

“I’m not money craving. If I could have done this work for free, I would, but at the end of the day, we have bills to pay, ... so you have to charge for it,” he added with evident passion for his craft.

Going by the moniker ‘Desgina Tyla’, Murray designs luxury tiles, beautifying the homes of his customers and creates unique work to fit the needs of his clientèle.

“I try to separate myself from other tilers that I see within the local [arena],” he said, noting that he does not generally choose work which is fastest to accomplish – also known as speed tiling – but is more interested in the aesthetics of the final outcome. And although those patterns might take time, “when its finished, it looks amazing”.

Breaking tiles (trencadís) is a mosaic pattern technique using porcelain or glass pieces which are arranged to create designs or pictures and Murray’s interest in this area was sparked after watching Chinese workmen creating 3D art with tiles. Having adapted the technique and added his own flair, Murray has branded the style of this artistic design as ‘kryptiling’.

With a passion for home-improvement projects, Murray also learned trades such as stone masonry, roofing, and bricklaying.

“The whole fact of [having] somebody’s dream in a your hands, when you complete it either how them want it or even better, just the reaction weh you get from somebody who see say your work done good and they see the vision they had for them house coming true, that’s one of the best feelings,” he said.

Michael Brown, who had hired Murray to fix leaks in his roof, describes the youngster as a dedicated and reliable worker.

“He did a really good job ... and shortly after, he started introducing some of his other works,” he said.

Since then, Brown has contracted Murray to do tiling and masonry.

“You could clearly see his craftsmanship [and] his work ethic is really good, which is one of the things that I’m really impressed with,” said Brown.

“Nowadays, you have some workmen that you give them a job [and] they come in and they do it and you pay them and you might find one or two faults with the job after they leave, but you call them and they never come back. I don’t have that issue with Gawain,” he said.

So far, Murray has been getting gigs through satisfied customers, who gladly recommend him to others. After creating social media accounts in March, he hopes to start a podcast to educate other young men, share his journey for motivational purposes, and offer insights into the world of construction.

He also plans to learn more about electrical work.

With the prime minister recently saying that Jamaica would have to import workers, particularly in construction sector, due to a labour shortage, Murray believes youngsters are making things bad for themselves by not being willing to learn without immediately earning riches from the job.

“The thing weh them grow up pon is once them jump in a working, them suppose to a expect a lot of money, because I see a lot of young men come in and is either them become the problem or them get misguided,” he added.

Gawain Murray can be contacted by telephone at 876-854-2640. He can also be found on Instagram – @designer_tyla. His work can also be viewed on his YouTube account at Designer Tyler.