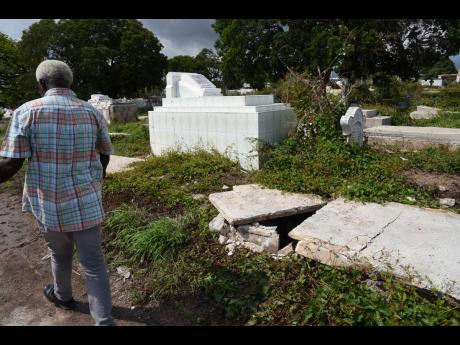 Ian Allen
Several graves were badly damaged inside the May Pen Cemetery in Kingston. 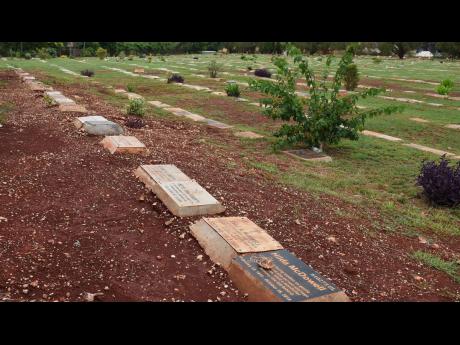 Ian Allen
At Dovecot Memorial Park in St Catherine, they use the signature metal head plates. 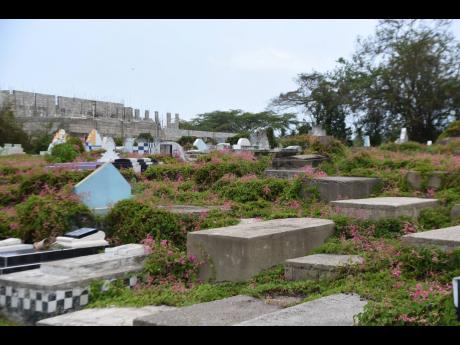 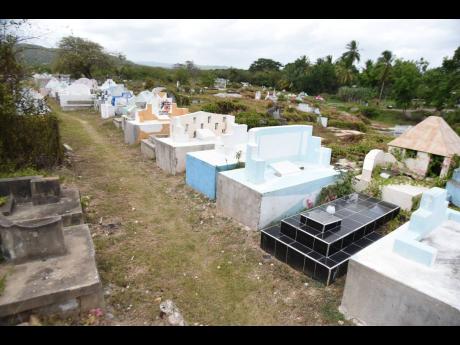 Kenyon Hemans
For decades, mourners have been violating cemetery contracts by planting trees, erecting monuments and making other alterations to their loved ones’ graves illegitimately, which is posing a problem for operators of the burial grounds.
1
2
3
4

So heavy was the pain after Marcia Johnson* buried her mother at the May Pen Cemetery in Kingston that it took her a while to revisit the grave. Almost three years later, the grief was manageable enough for her to make the trek. She was shocked to...

So heavy was the pain after Marcia Johnson* buried her mother at the May Pen Cemetery in Kingston that it took her a while to revisit the grave. Almost three years later, the grief was manageable enough for her to make the trek.

She was shocked to see the shabby state of the grave and unable to find anyone in sight to make enquiries.

“The whole place just bush up and full of garbage. Me couldn’t believe me mother grave look so,” the Kingston inner-city resident told The Sunday Gleaner.

On her way out she saw some graves with elaborately designed headstones. She wanted one of those for her beloved mother.

It took some doing, but eventually, she found out who made them and had one designed. She had no idea that she needed permission from the authorities to install it. Her only thought was to give her mother a beautiful resting place with a headstone designed in the form of something she loved.

“A you a mek me know seh me did have to ask them first. Me see other people do it and the man who make it for me never tell me nothing like that, so me nuh know,” she said to The Sunday Gleaner.

For decades, mourners have been violating cemetery contracts by planting trees, erecting monuments and making other alterations to their loved ones’ graves and tombs, posing a problem for operators of the burial grounds.

At privately run cemeteries, the contraptions include custom-designed headstones, statues, crosses and flowering plants; while at public cemeteries, some persons have erected elaborate concrete designs of all kinds.

This is not acceptable, and is particularly a “no-no” in public cemeteries, unless a paid permit is received prior, various municipal corporations across the island confirmed to The Sunday Gleaner.

Jamaicans are only allowed to debush and paint their loved ones’ graves after burial. Any other alteration – including tiling, grilling or masonry work – is considered ‘tombing’ and attracts a fee of between $5,000 and $7,000, depending on the parish.

The corporations say some persons comply, but others sneak into cemeteries late at nights to carry out the upgrades undetected.

It wasn’t clear from the responses whether repair work done on graves by relatives was included in the fees for public cemeteries, but many graves seen by our news team were in disrepair and at least one showed signs of burglary.

Private cemeteries like the Dovecot Memorial Park and Meadowrest Memorial Gardens in St Catherine seemed to be doing better at maintenance.

Illegal upgrades are particularly rampant at the deteriorating May Pen Cemetery, where Manager John Cornwall and his handful of staff have taken on additional duties of demolishing the prohibited structures. They also contend with grave robbers, who loot just about everything – from headstones to coffins.

“Sometimes they (relatives) wait till late in the nights to do it (construction). So when we come back here in the mornings we see the fresh cement,” noted Cornwall, complaining that his budget and manpower to take care of the 200-acre cemetery is far from adequate.

Five persons are on staff to take care of maintenance and grave-digging, he said.

“This is originally a vault,” he said, pointing to one of the dismantled graves in the cemetery. “And they were trying to build it up to make it look like a sepulchre. We stopped them. They couldn’t get any further.

“If they want to do something like this, they have to make the necessary arrangements with the Kingston and St Andrew Municipal Corporation,” Cornwall said. “Otherwise, we are going to destroy them.”

The Sunday Gleaner sought to find out from the Ministry of Local Government, which has responsibility for public cemeteries, whether there was an overall policy regarding grave amendments, fees, as well as the budget for public cemetery maintenance in recent years.

However, the ministry only offered: “We suggest that the various municipal corporations which have responsibility for areas queried be contacted for response.”

In the meantime, the Dovecot Memorial Park came under scrutiny recently after mourners observed displaced headstones strewn around the property.

The cemetery manager, who asked not to be named, outlined a “deeper” issue during a tour of the property.

“We only use these metal head plates in the graves but if you look around you will see all these fancy marble headstones. These are not provided by us and really should not be here,” he said, pointing also to a spread of concrete angels and flowers planted at the head of graves throughout the cemetery.

“So what happened is that many persons when they change the metal plate they just throw them away. But really they shouldn’t be making any alterations or planting any trees here. It is in the contract!” he continued, adding that because the alterations are minimal, they are mostly left undisturbed.

“Each vault is marked underground, however, so even if headstones are removed for property maintenance they can always be replaced,” he said.

This is particularly the case whenever there is flooding on the compound, he said, as The Sunday Gleaner team observed a work crew building a retaining wall by an area that was recently affected by a deluge.