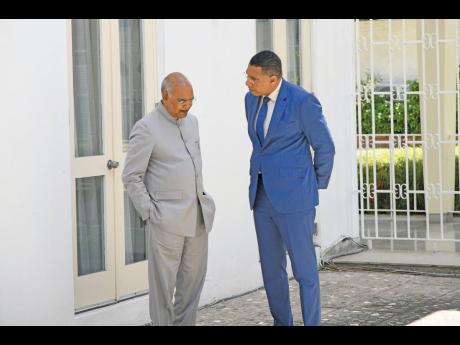 Rudolph Brown/Photographer
President of India, Ram Nath Kovind (left), has a private conversation with Prime Minister Andrew Holness before the signing of a memorandum of understanding between both countries at Jamaica House on Monday.

The Government is to mirror the Indian model in its implementation of the controversial National Identification System (NIDS) that is expected to come on stream later this year. Minister without Portfolio in the Office of the Prime Minister, Floyd...

The Government is to mirror the Indian model in its implementation of the controversial National Identification System (NIDS) that is expected to come on stream later this year.

Minister without Portfolio in the Office of the Prime Minister, Floyd Green, who has oversight of the programme, said the Government was drawing from its Indian counterpart because it has the largest biometric database globally and had issued a national unique identifier in 2009.

Green made the disclosure on the second of a four-day visit of Indian President Ram Nath Kovind to the island.

“A lot of what we’re doing in the National Identification System is taken from the learning and experiences of India,” said Green in a Gleaner interview at Jamaica House in St Andrew on Monday.

“They’ve set up their unique identification authority and we’ve looked at their model and we’re looking to see how we can tweak that model to set up our national registration authority,” he added.

Green said the Government is on the “final stretches” of establishing the authority and that Cabinet’s approval of the structure will be sought in another two weeks.

Approval is expected to be followed by engagements across agencies.

The Government’s implementation of NIDS faced setbacks after the court annulled the law, ruling that its compulsory registration and obligation to provide biometric data was unconstitutional and breached privacy rights enshrined under the Charter of Fundamental Rights and Freedoms.

New legislation shorn of the compulsory mandate was eventually passed.

“Our own jurisprudence drew from the Indian experience when they made their ruling. Coming out of that ruling, the whole complex of NIDS has changed. NIDS is a voluntary system and is under the Data Protection Act,” Green said.

The court had struck down aspects of NIDS that gave third parties access to personal information without consent. It said that this was a breach of an individual’s right to privacy.

In India, permission must be sought from the individual whose information is to be used or disclosed. The same obtains for disclosure with regard to a crime. The individual has the right to a fair hearing before a decision is made to release their information.

“As we go along and have more discussions, people will recognise that we have taken from our friends in India and we’ve come and put together an even stronger bill and an even stronger system,” said Green.