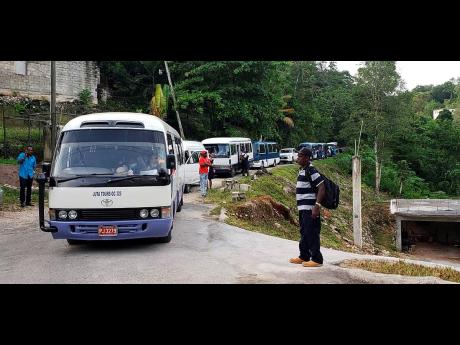 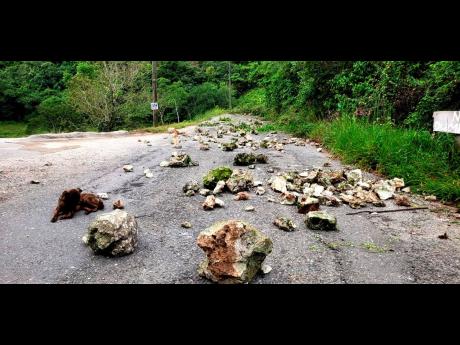 Contributed
A section of the blocked roadway in Retreat, St Ann, yesterday morning as residents protested the irregular power service in the area.
1
2

Upset over a lack of regular electricity supply, angry residents of Retreat, St Ann, blocked the main road leading from their community to Stewart Town, Trelawny, on Monday, causing scores of students to miss school in both parishes.

Several students from Westwood High in Trelawny and York Castle, St Hilda’s and Brown’s Town high schools as well as the Brown’s Town Community College in St Ann were among commuters forced to abandon or alter travel plans after residents used trees and rocks to block the thoroughfare.

More than two dozen buses transporting students between both northern parishes were unable to complete their trips.

Residents claim that electricity supply in Retreat, which is located close to Brown’s Town, has been irregular since last week, causing disruption to their normal routines.

A team from the Jamaica Public Service, the power supplier, was dispatched to rectify the problem as tempers flared.

Deputy Superintendent of Police Christopher Bowen, who also lives in Retreat, said that in addition to the inconvenience caused by the frequent power cuts since last week, residents were fearful that the outages could damage their appliances or otherwise endanger their properties.

Bowen, who works in Trelawny, was himself prevented from reaching the parish as a result of the disruption.

“I was caught up in the roadblock, wanting to go down to Stewart Town to retrieve a vehicle, and I couldn’t make it at all,” he confirmed to The Gleaner.

“I came out like after 5 [a.m.], and the road leading towards Stewart Town from Retreat, where I live, was blocked. When I enquired, I saw two guys. They said the blockage was worse farther along. The truth is, we’ve been suffering in this area, and every minute they (JPS) come, it’s like a Band-Aid put on a major sore. So residents said enough was enough,” added Bowen.

Retreat is a community where Kaiser Bauxite resettled residents decades ago to carry out mining activities in their former settlement. At the time, there was one transformer serving about 10 households.

The residents said that despite the community expanding to more than 70 households, there has been no upgrade to the power supply to meet the demand to accommodate additional customers.

After the JPS team responded, vehicular access was restored to the roadway.