95-y-o sage revels in growing up with Gleaner 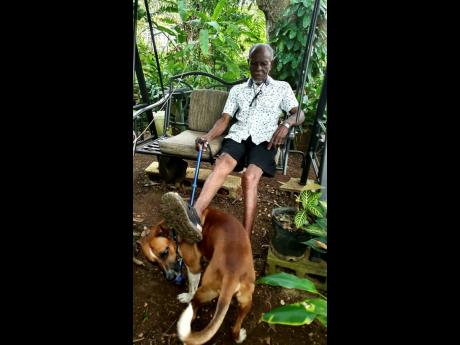 Photo by Janet Silvera
Fitzroy Buchanan, 95, plays with his best friend at his home in Coral Springs, Trelawny. 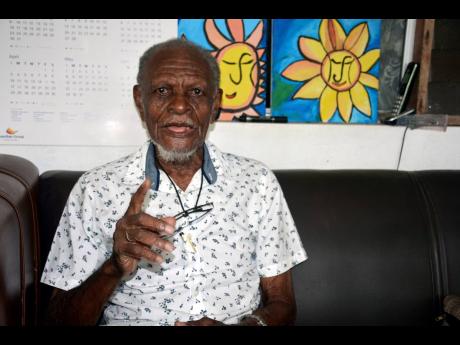 Photo by Janet Silvera
Fitzroy Buchanan has been reading The Gleaner for 88 years, starting when he was age seven.
1
2

An avid reader of The Gleaner for 88 years, nonagenarian Fitzroy Buchanan has credited his development to the knowledge and awareness gained from reading the near-200-year-old newspaper.

Buchanan, who turned 95 on Monday, picked up his first Gleaner at age seven in 1934 and fancies himself as a bit of a wordsmith with rich regard for local and world affairs.

He recalls a man named ‘Old Tom’ Robinson in the St Mary district Robin’s Bay where he lived ensuring that he had access to the publication every Saturday.

Those days, he would comb through the sports pages for the latest news.

“I grew up on The Gleaner, and since 1942 I have not missed a day,” he said during a visit to his home in Coral Springs, Trelawny, last Saturday.

He receives his newspaper sometimes as early as 4 a.m.

He treasures a birthday gift of a framed front page featuring two photos of him which he received when he turned 93.

Having watched the newspaper’s growth and the competitors it has faced over time, the one that stuck out for him remains The Standard in the late 1930s.

“When The Standard came on the market and they were vying heavily against The Gleaner, they bought about 25 or 30 motorcycles or more to go throughout the island, and The Gleaner remained the same as they were, and eventually The Standard crashed and died,” he reminisced.

An electrical engineer, the Islington-born Buchanan said that upgrading his educational profile and finding a job all came through the newspaper.

“I saw an advertisement in The Gleaner for Bennett College in England, advertising for people to do courses, among them electrical engineering. Their representative in Jamaica was at 49 East Street,” he stated.

Having applied and received lessons by mail from the United Kingdom, he soon after discovered that a company in Monymusk, Clarendon, needed young engineers and electricians. He later got a job in Long Pond, Trelawny, in 1961, where he remained until retirement.

A father of six – four daughters and two sons – he ensured that his children followed in his footsteps. His wife Edith died in 2002.

Miller and her siblings were fascinated with their dad’s ability to decipher crossword puzzles daily.

“Daily reading stimulates the mind, stimulates conversation, and it gives him a lot of knowledge. I have actually had to ask him things like the meaning of words, especially from the puzzles,” she said.

Buchanan remembers well a famous May 8, 1945, headline as if it were yesterday.

‘Decisive victory over the Nazis’, the report read, as World War II came to an end, he recalled.

Buchanan built a strong relationship with newspaper delivery men when he retired, leaving Christmas gift packages, including fruits, hanging on his gate.

His nephew, Denny Ennis, who currently lives in Ghana, is on island for the 95th birthday celebration. The two are extremely close and have what Ennis describes facetiously as a “combative” relationship.

“We see the world through different eyes for a number of issues. And so, of course, that’s really good fun because we speak to each other about world politics,” the nephew said.

“I’m a historian and see things from a pan-Africanist perspective. He has been brought up in a Eurocentric sort of way, so there are differences in how we see things.”

Buchanan said he also makes sure to get a daily dose of CNN, BBC, or RJR.

The senior is still very active, turning his home into a floral “jungle”. Trees of all descriptions, including mango, ackee, and breadfruit, are in his yard and he still fancies his workmanship, performing do-it-yourself fixes to tiles and his staircase.