Crackdown on Jamaicans as Mexicans plug human-smuggling scheme to US 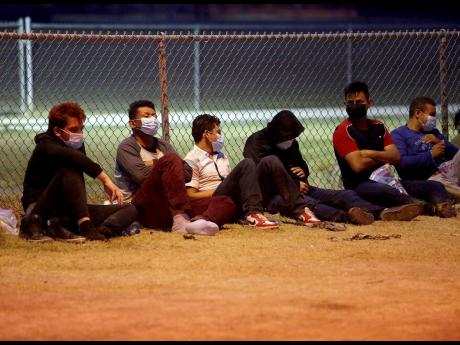 AP
Immigrants detained by the US Border Patrol rest along a fence in La Joya, Texas, on Tuesday. It has emerged that Jamaicans are linking up with Mexican collaborators to get into the US through a human-smuggling scheme.

The Mexican government has toughened immigration processes in permitting landing to Jamaicans amid growing concerns over an illegal “human-smuggling” corridor to the United States. The development has caused increased scrutiny on travellers on bona...

The Mexican government has toughened immigration processes in permitting landing to Jamaicans amid growing concerns over an illegal “human-smuggling” corridor to the United States.

The development has caused increased scrutiny on travellers on bona fide business or leisure trips as Jamaicans with criminal records or other red flags pay thousands of US dollars for safe passage into Mexico.

The Ministry of Foreign Affairs and Foreign Trade has been made aware that legitimate travellers are also being denied entry.

Sharon F. Saunders, Jamaica's ambassador in Mexico, said it was regrettable, but understandable, that immigration authorities have ramped up vigilance as part of a clampdown on illegitimate travellers.

“Persons are not being trafficked, as they are willing participants and seem to be paying substantial sums for the illegal services of coyotes to guide them across the Mexico-US border at various points,” Saunders told The Gleaner.

A coyote is a person who smuggles people from Latin America across the US border, typically for exorbitant fees.

“The practice is illegal, dangerous and very risky,” said the ambassador, who urged local authorities to “strongly discourage our nationals from attempting this activity”.

Data provided by Mexican immigration authorities reveal a drastic increase in the number of travellers from Jamaica over the last two years.

For the first three months of 2022, a total of 2,929 Jamaicans travelled to the North American country. That trajectory could account or 12,000 travellers from Jamaica by year end.

The ambassador insists, however, that only a few persons are involved in human smuggling, saying most visitors coming to Mexico had genuine interests in business or tourism.

“ Bona fide visitors have unfortunately experienced being denied entry, as is the right of immigration officers at ports of entry, when they fail to convince immigration during filter interviews,” Saunders told The Gleaner.

Travellers who are not cleared for passage are usually returned to Panama on the next available flight within hours.

Several Jamaicans who have successfully made the illegal trip into the US, or been denied entry into Mexico, tell of a coordinated network of collaborators who assist the border crossers.

“Anyhow Jamaica did have straight flight to Mexico, yard empty. You have to travel through Panama and then go Mexico.

“Once you get through the Mexican immigration, you gone clear. You just link who fi link and make your way to the border. Why you think Trump did want build the wall?” the Jamaican immigrant now in the US, who requested anonymity because he could be subject to prosecution, told The Gleaner.

His reference was to Donald Trump, the former United States president who spearheaded an anti-immigrant policy considered racist in global circles.

“You have Jamaicans over there working with the Mexicans. You can go through a tunnel or walk the desert. Right now, mi have US$1,000 and mi a wait pon US$2,000 more,” an aspiring immigrant said, adding that he was determined to flee the island.

Some Jamaicans who have been caught on the border-crossing journey have had their passports confiscated and arraignment dates scheduled.

Questions were sent to the United States Department of Homeland Security, the US Citizenship and Immigration Services, the Immigration and Customs Enforcement (ICE), US Coast Guard, Customs and Border Protection, Cybersecurity and Infrastructure Security Agency, Federal Emergency Management Agency, Transportation Security Agency, and the Secret Service.

The Gleaner is still awaiting responses from US authorities.

Attempts to get a comment from Deputy Commissioner of Police Fitz Bailey, who heads the crime portfolio in Jamaica, have not been successful.