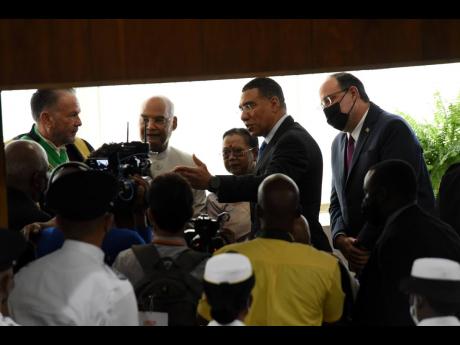 Indian President Ram Nath Kovind has said that the South Asian country is willing to share its technical skills with Jamaica to advance the island nation’s prospects in education and commerce.

Speaking at Tuesday’s joint sitting of Parliament, Kovind said Jamaica’s strategic position in the vicinity of some of the largest global economies provides the country with an excellent opportunity to become a knowledge highway, ultimately benefiting from the fourth industrial revolution.

Kovind said India shares the country’s Vision 2030 goals of empowering its people and ensuring a secure, cohesive, and just society while becoming a prosperous and sustainable economy.

“India is ready to partner with Jamaica and share its technical skills, knowledge, and expertise which could transform Jamaica’s education and businesses,” he told legislators.

Noting that India and Jamaica are already cooperating under the International Solar Alliance for reducing the carbon footprint, the Indian president said there is great potential for partnering in the railway and agricultural sectors, which are among India’s strengths.

He disclosed that Jamaica has expressed an interest in hosting an institute.

“The National Education Policy has also opened up specialised technical courses in premier Indian colleges and universities for foreign students.

“Jamaican students should take advantage of this opportunity of studying at some of the best institutions respected globally, charging only a fraction of the cost compared to Western institutions,” he said.

Meanwhile, Minister of Industry, Investment and Commerce Aubyn Hill told The Gleaner that Jamaica is looking at areas in which it can export services to India.

Hill said along with tourism, business process outsourcing (BPO) services can be exported, noting that the sector pulled in US$900 million in 2021.

“If we’re going to become a rich country, we’re going to have to export a lot more than we do now. You’re not going to get rich selling to Jamaica. We really have talked about export, but we really haven’t focused on it,” he said, adding that an expert export team has been assembled in the ministry.