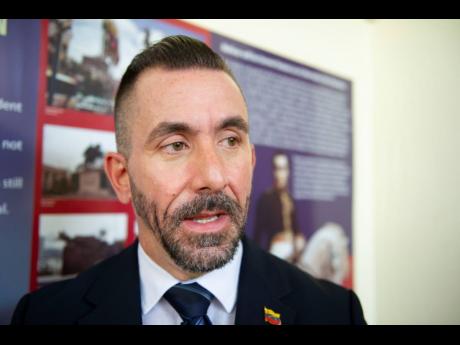 The Venezuelan government said it has no resentment towards the Holness administration after Jamaica compulsorily acquired Caracas’ 49 per cent stake in the Petrojam refinery amid the threat of sanctions from Washington. The revival of the South...

The Venezuelan government said it has no resentment towards the Holness administration after Jamaica compulsorily acquired Caracas’ 49 per cent stake in the Petrojam refinery amid the threat of sanctions from Washington.

The revival of the South American state’s oil-trading relationship with Jamaica has been floated over the last two months as price volatility roils global markets three months into the grinding military conflict between Russia and Ukraine.

Venezuela’s chargé d’affaires, José Antonio Sánchez Vegas, has given the assurance that there are no hard feelings.

“We have never closed the door. We have always been there and willing to cooperate again,” Sánchez Vegas said in a Gleaner interview on Wednesday.

“Venezuela has always remained open for Latin America and Caribbean countries” and is prepared to fully foster future partnerships, the chargé d’affaires said.

Oil supplies to Jamaica under the PetroCaribe Agreement, a regional pact inked in 2005 by the then Patterson administration, had dried up months before Kingston’s buy-back of Venezuela’s Petrojam stake in 2019.

The Jamaican Opposition has chastised the Government for its treatment of Venezuela, arguing that its chilly relations reeked of betrayal after the country benefited from preferential terms.

Phillip Paulwell, opposition spokesman on energy and former portfolio minister, said last month that it is necessary for Jamaica to “approach our US partners requesting special dispensation to overcome the sanctions”.

He has criticised the Holness administration for “a most glaring act of ungratefulness shown to Venezuela”.

Daryl Vaz, the current energy minister, recently expressed hope for a restoration of ties but did not make any commitments on that score.

Sánchez Vegas said he is aware of the diplomatic tightrope on which Jamaica is walking.

“We understand that [there] has been some kind of dissension between our countries because of different political situations and moments, but the government of Venezuela is always trying our best effort to overcome our own situation with any outside interference,” he said.

When then US President Donald Trump issued an executive order in 2017 imposing restrictions on government entities in the South American country, Jamaica approved legislation to buy Caracas’ Petrojam shares and channelled the funds into an escrow account to avoid US sanctions.

Sánchez Vegas has poured scorn on Washington’s invitation to Venezuela’s opposition leader Juan Guaidó to the Americas summit next month.

CARICOM has urged members of state to reject any attempts by US President Joe Biden to validate Guaidó in a snub to Venezuelan President Nicolas Maduro, whose leadership Washington has sought to undermine because of electoral irregularities.

The US and dozens of allies had recognised Guaidó as Venezuela’s de facto leader in 2019.

But Sánchez Vegas has bluntly rebuffed those assertions.

“There is no other figure beyond Nicolás Maduro ... . He is our leader; he is the official representative of the government of Venezuela,” he said.

Sánchez Vegas said Venezuela would concentrate on working with its global partners, including Cuba, Nicaragua, and Mexico.