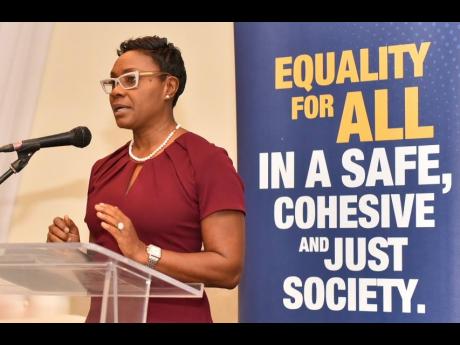 Contributed
Juliet Cuthbert Flynn, state minister in the Minister of Health and Wellness, addressing yesterday’s 8th annual Larry Chang Symposium, which was hosted by the Equality For All Foundation under the theme ‘Pink Sugar: Situating LGBT Jamaicans in the NCD Response’, at The Jamaica Pegasus hotel in New Kingston.

Junior Health Minister Juliet Cuthbert Flynn has said that the Government will be revisiting customer service experience in public-health facilities and is partnering with a business process outsourcing (BPO) outfit to improve public confidence in...

Junior Health Minister Juliet Cuthbert Flynn has said that the Government will be revisiting customer service experience in public-health facilities and is partnering with a business process outsourcing (BPO) outfit to improve public confidence in patient services.

Speaking at a symposium Thursday, Cuthbert Flynn noted that the Government remains sensitive to the need for a comprehensive effort to combat all forms of discrimination to improve access to health services for vulnerable groups.

Cuthbert Flynn noted that the island’s lesbian, gay, bisexual, and transgender (LGBT) community is key to improving the nation’s health outcomes as she noted that non-communicable diseases (NCDs) continue to have a debilitating impact on the public-health system, with one in three Jamaicans being hypertensive, 54 per cent being obese, and one in every eight being diabetic.

“There is ongoing work by a range of stakeholders, including civil society organisations and international development partners, to end the stigma and discrimination in all settings so that Jamaica can have an enabling environment that provides access to healthcare services,” she said while addressing the 8th annual Larry Chang Symposium, which was hosted by the Equality For All Foundation (EFAF) under the theme ‘Pink Sugar: Situating LGBT Jamaicans in the NCD response’ at The Jamaica Pegasus hotel in New Kingston.

Chang, the first openly LGBT person on record in Jamaica, founded the Gay Freedom Movement in the 1970s.

“We will also reintroduce the public to the complaints mechanism as a tool for which reports may be made regarding any violation of patient rights. We will enhance this function to better receive, track, and follow-up on complaints,” she said, adding that a BPO company would be engaged to facilitate this.

She called on all Jamaicans to give special attention to their health and well-being through engaging in better eating habits and increased physical activity.

In April 2021, the EFAF commissioned a rapid literature review and although no study that examined NCDs among LGBT Jamaicans was found, research conducted in the United States and other countries reported higher rates of NCDs and their risk factors among LGBT populations.

The EFAF also conducted interviews and a focus group discussion, where participants pointed out that the pervasive sexuality and gender-based stigma and discrimination in Jamaica created excess risks for LGBTs.

The participants also described the fear of being judged in healthcare settings as a potential barrier to seeking care.

Senior resident at the University Hospital of the West Indies, Dr Jordan Eaton, explained that locally and internationally, men have poor health-seeking behaviours.

“If you are gender non-conforming, compounded further if you do not have access to private healthcare or insurance, you have to go to a public clinic where you will face discrimination. Let’s not mince words. You will face discrimination if not from the healthcare providers – which shouldn’t happen, but does, from the other persons within the clinic – from the security as you walk through the door straight up to the doctor,” he lamented.

Meanwhile, Glenroy Murray, the EFAF’s interim executive director, said there is need to chart new frontiers as traditionally, focus has been placed on the sexual and reproductive health needs of LGBT Jamaicans.

“Let us focus on the need for LGBT Jamaicans to be included in the national response to NCDs as we work together to ensure that the right to health of all Jamaicans is respected, protected, and fulfilled,” Murray charged.