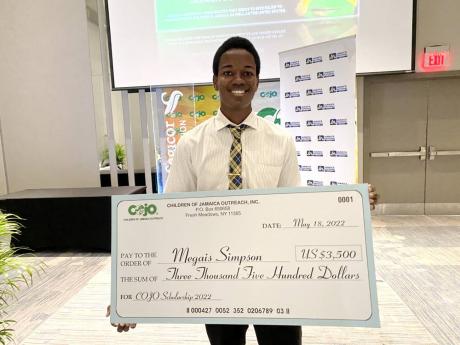 Former state ward Megais Simpson believed that the intervention of social workers to shape the course of his life over the past 17 years has been instrumental in setting him on a path to success.

The 19-year-old believes that were it not for the dedication and care shown by officers from the Child Protection and Family Services Agency, he would not have topped the island and placed sixth in the region in financial services studies at the Caribbean Advanced Proficiency Examination level last year.

The upper sixth-form student, who has been named the Children of Jamaica Outreach, Inc (COJO) scholarship awardee for 2022, is now looking forward to pursuing a bachelor’s degree in banking and finance at The University of the West Indies, Mona, starting in September.

“I feel really grateful,” the slim-figured adolescent told The Gleaner at the AC Marriott Hotel on Wednesday after accepting the US$3,500 COJO scholarship to offset expenses for his studies.

Simpson reflected that up to five years ago, he was not like this. In fact, he admitted that he was a troublemaker, but with counselling, his life changed for the better.

He was given over to the State at two years of age because his mother was unable to care for him.

“I’m not quite sure where she is, but I did not know her,” Simpson told The Gleaner.

He said that having not established a bond with his biological parents, he faced many challenged over the years, sometimes resulting in vengeance and anger.

“I was kicked out several times, but I still managed. My uncle adopted me, and … I gave a little trouble, so I went to my father for one month, but him too old fi dis, so him kick mi out again, then I went to my sister. She never really kick me out. I leave before she kick me out,” he said before laughing as he reminisced on his struggles.

He added: “If I could go back in time with this amount of knowledge, I would have known better. I’m more settled and smarter now.”

He is grateful that the State paid his boarding fees for him to stay in Santa Cruz, setting the stage for a turnaround.

While not sure what he would like to do after university, Simpson wants a career in the field of finance.

“I want to do more than one stuff. I want to be very diverse,” he said, adding that he is also dreaming of becoming a business owner.