Nursing grads struggling to get jobs despite public sector shortage 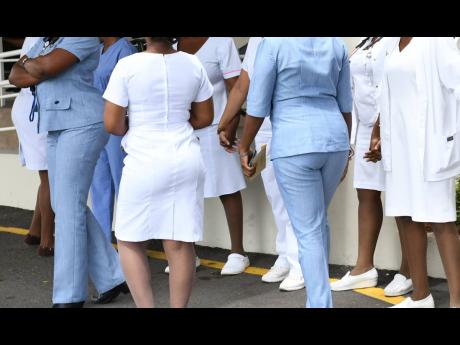 Despite a shortage of nurses islandwide, several recent nursing graduates are expressing frustration at being unable to land jobs in the public health sector. A group of 2021 University of Technology, Jamaica graduates, who have also been...

Despite a shortage of nurses islandwide, several recent nursing graduates are expressing frustration at being unable to land jobs in the public health sector.

A group of 2021 University of Technology, Jamaica graduates, who have also been registered with the Nursing Council of Jamaica, told The Gleaner that the situation was puzzling since officials are frequently raising concerns about the attrition rate in the public health sector, as many nurses look overseas for better opportunities.

Some graduates have expressed fears of being unable to meet student loan obligations, with repayment due to begin in September.

Twenty-six-year-old Jolene*, who spoke on condition of anonymity, said, after applying to the Spanish Town Hospital in St Catherine, the University Hospital of the West Indies in St Andrew and the Kingston Public Hospital (KPH) in the capital city, she got an interview at Spanish Town Hospital in February. Administrators later informed her that she had been successful but, three months later, she is yet to get a date to commence duties.

Five of the 40 graduates from her batch are now working at private health facilities. Three others, Jolene said, have been accepted at KPH, Bustamante Hospital for Children and Linstead Hospital, in the public sector.

She said that she had previously been placed on a waiting list as administrators said that there were internal issues to be sorted out before they could begin hiring.

“Most of us [who] applied haven’t gotten any call. Some of us went on interviews awaiting start dates and cannot get any start dates because of what is happening with the Government,” she said, noting that some of her batchmates have now sought employment elsewhere, including in the business process outsourcing (BPO) sector.

With a child to support, Jolene, too, had picked up a job in another sector but, with her heart in healthcare, she began feeling miserable as she was not enjoying it and had decided to quit.

Now unemployed, she has been heavily reliant on her partner to keep the family afloat and is now eyeing job opportunities in Canada and the United States.

“I have really given up because I did not expect that it would be so difficult as an essential worker to get employed by the Government,” Jolene said in frustration.

Nurses Association of Jamaica President Patsy Edwards-Henry told The Gleaner that there has always been a shortage of nurses in Jamaica, as a result of a limited number of pensionable posts.

“What needs to happen is for the Government of Jamaica to do an analysis to look at the needs of Jamaica moving forward,” she said, noting that, while there has been much talk about a primary healthcare renewal and the building of new facilities, there needs to be a training target after determining the number of nurses needed islandwide.

Health Minister Dr Christopher Tufton admitted that there was a deficit of approximately 1,000 nurses in all specialties, including critical care, paediatric and emergency nurses, but noted that registered nurses were the most employed.

He said that the health ministry is in the process of recruiting 270 newly graduated nurses, but said that this would take some time.

Turning to the issue of migration, Tufton said that the Government needs to “rethink how we structure labour arrangements in public health to include more cross-border collaboration around work and training”, adding that his team is currently pursuing these ideas with stakeholders.

But, as the wheel slowly turns, the frustration is building.

Twenty-three-year-old registered nurse Marie* also successfully passed her interview at the Montego Bay-based Cornwall Regional Hospital. However, an original start date of April 1 keeps getting pushed back, and repeated attempts to get an explanation have made her weary.

“I am so frustrated now. I have my licence, I have my education. I spent a lot of money on my education and [I am owing] student loans. I don’t have any time to sit back and wait two, three months,” she told The Gleaner.

“The healthcare system is in shambles, complete shambles,” Marie said.