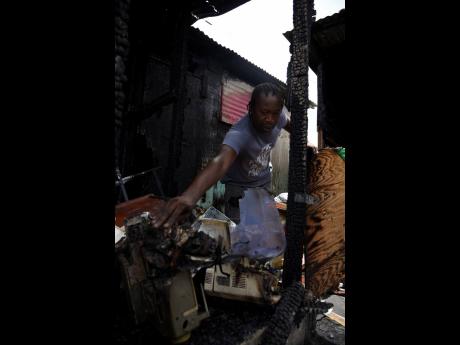 Nicholas Nunes/Photographer
Raymond Thomas, who, along with his wife, Gurandah, owns several shops at the Morant Bay Arcade in St Thomas, shows some of their property that was destroyed by fire. 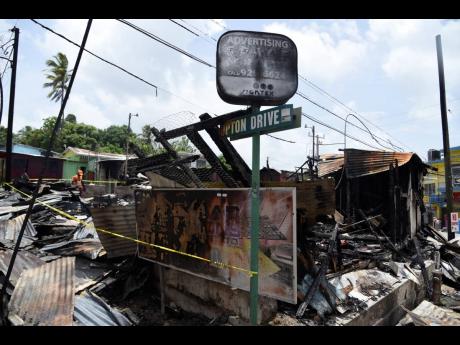 Nicholas Nunes/Photographer
Salvagers comb through the charred rubble at the Morant Bay Arcade, approximately 70 per cent of which was destroyed by fire.
1
2

Rose Byfield is a broken woman.

A vendor selling clothes for more than 20 years in the Morant Bay Arcade, she was shell-shocked as she surveyed the wreckage caused by an early morning fire at the St Thomas site.

She is among 19 shop owners who are now assessing their future after their businesses went up in smoke on Sunday.

The arcade, which is owned and operated by the St Thomas Municipal Corporation, has been the main source of income for several families.

For Byfield, it was the proverbial bread-and-butter.

Vendors have suffered at the hands of burglars, but Byfield says nothing compares to the disaster that unfolded Sunday morning.

“I don’t know what to say. I am in complete shock,” she lamented.

“This is a major loss for all of us ... . We never see anything like this. I don’t know how I am going to bounce back.”

Keith Brown, who operates an ice cream parlour next to the arcade, said he witnessed smoke coming from the area about 6:25 a.m. and ran to the fire station metres away to raise an alarm.

“When I got there, I was told that the only fire unit at the Morant Bay Fire Station was in Seaforth on a call,” Brown told The Gleaner.

He added: “By the time the unit reach, the whole place was on fire. I am counting my blessings because I saw the fire following the JPS line to my business, and I got a piece of dried stick and broke the wire before it reached my building and the other adjoining ones.”

Brown said his action would have saved a complete block on Queen Street from destruction.

Raymond Thomas, who operated a barber shop, and his wife Gurandah, who ran three textile and clothing outlets in the arcade for the last 15 years, suffered major damage to their property. They lost 12 commercial sewing machines, barber chairs, and clothing and textile valued at an estimated $3 million.

“Everything’s wiped out ... machines, building structure, everything. A lot of money,” Thomas disclosed.

His wife, who combed through charred fabric as if seeking a glimmer of hope, described her situation as a complete disaster. But she was philosophical in the midst of the devastation.

“Mi nah put it on my head. This is how it is. I can do nothing about it now,” Gurandah said.

She is hopeful about the prospects of reviving her business, emphasising that she still had her client base and could maximise her versatility in dressmaking, floral arrangement, and decorating.

Councillor for the Morant Bay division, Rohan Bryan, did not respond to numerous calls to his cell phone.

Horace Thomas, deputy superintendent in charge of the St Thomas Fire Department, estimated total losses at $20 million. About 70 per cent of the building was destroyed.

“The Morant Bay unit was on another call when we got this call, and so it had to respond from Seaforth to Morant Bay, but given the fact that the shops are primarily constructed with board with zinc roofing, we would have been able to save thirty per cent of the property.

Two units were deployed from the Yallahs Fire Station to assist the Morant Bay unit. More than two dozen firefighters battled the blaze.

Investigators are yet to determine the cause of the blaze.