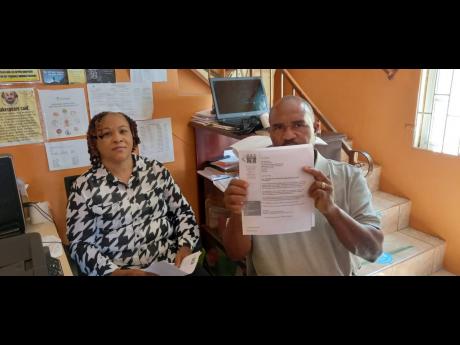 Photo by Olivia Brown
Peter Minott, maintenance manager at Meadowlands Centre of Excellence in May Pen, Clarendon, shows a suspension letter sent to the institution by the HEART/NSTA Trust, citing several breaches at the Bushy Park-based facility. The breaches, he and his director wife Sharon say, are false.

A Clarendon school operator has slammed national training agency HEART/NSTA Trust for crushing the future of many at-risk youths by terminating a partnership with Meadowlands Centre of Excellence in Bushy Park. Sharon Minott, director of...

A Clarendon school operator has slammed national training agency HEART/NSTA Trust for crushing the future of many at-risk youths by terminating a partnership with Meadowlands Centre of Excellence in Bushy Park.

Sharon Minott, director of Meadowlands, said the decision to withhold agreed budgetary funding since the institution’s inception in 2018 could have an existential impact on the school’s operations.

The amounts granted to the school, over the last three years, were half or less than the agreed figure, she said.

However, HEART/NSTA Trust has denied the allegations, warning Minott to refrain from aspersions that could be potentially damaging to the Trust. HEART also said that the matter had been referred to the Integrity Commission, which, by law, does not comment on investigations.

In a December 30, 2020 termination letter seen by The Gleaner, HEART outlined that its decision to end the partnership with Meadowlands was based on six reasons, including character assassination, reputational damage, and “threats to assigned community interventions manager/officer” by Meadowlands Centre of Excellence staff.

The entity continued by stating that it took several approaches to continue working with the training centre, including “removing the initial community interventions manager/officer and placing a manager/officer they were very satisfied and comfortable with initially”.

HEART, in the letter, revealed that despite those efforts, the problems still persisted. The state agency, in the termination letter, also responded to concerns of non-payment of subventions, stating that forms were not completed properly for the completion of transactions.

Minott has, however, dismissed the alleged breaches as untrue and incorrect, adding that HEART’s decision was fuelled by personal vendetta.

Minott asserted that the closure of her training centre could cause grave woes for the community, adding that she founded the institution to stem crime in Bushy Park.

“I got held up by gunmen and I decided to move from the community. In 2015, I saw the need in the community for training. We had a lot of robberies and stuff going on during that time, so I called the HEART Trust and [discussed] my plans and vision for the community,” she said.

“Right now we’ve been doing everything from pocket, and we don’t charge school fee here. All we charge is registration fee, because our mission and vision is to help to create employment and professionals,” Minott added.

The Meadowlands Centre of Excellence director said the institution had received a contract letter in March 2019 from Wayne Battiste, the then community training intervention manager, which accompanied an acceptance letter on the precise sums involved.

But Minott alleged that that contract sum differed from the amount cited in the letter.

Minott said that the discrepancies were communicated to Battiste, who requested the letter be sent back.

“A few days after, he sent another letter and it was still different. When I called him, he invited us to a meeting, and when we went to the meeting, he said we have to work with it because his director don’t like when we a come back, come back; and if we come back again, it a go cut further,” she said.

The Gleaner contacted Battiste, who said he was not authorised to speak on the matter.

Battiste said, however, that whatever role he undertook, he ‘’acted on instructions”.

Two letters from HEART indicating a payment transfer to Meadowlands for the period were also shown to The Gleaner.

According to Minott, those two payments were the only funding received.

She said that the funding fallout caused many trainees to drop out of the programme.

“We had a lunch programme for them and the funding was cut off abruptly, so the trainees stopped getting the assistance, and a lot of them stopped coming,” Minott told The Gleaner.

Citing psychological trauma, Minott said that her personal income has dwindled, causing her own child to withdraw from university.

But in the statement sent to The Gleaner, HEART rubbished her assertions.

“The organisation wishes to advise that the contract between the HEART/NSTA Trust and the Meadowlands Centre of Excellence was terminated as per termination clause of said referenced contract to which both parties were signatories. This termination took effect almost a year ago on March 31, 2021,” the statement read.

It continued: “The Trust uses this opportunity to inform you that it uses an approach for partnerships that is heavily evidence-based and in this instance, we rely on carefully outlined evidence to refute assertions being made by Mrs Minott.”