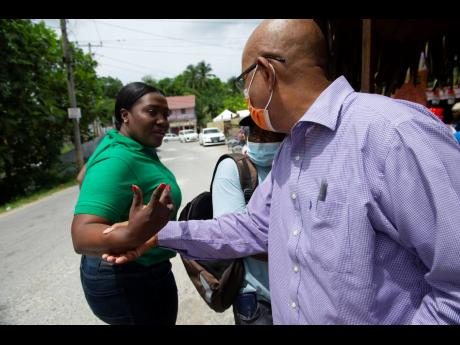 Ricardo Makyn/Chief Photo Editor
St Catherine North East Member of Parliament Kerensia Morrison pulls away despite entreaties by Spanish Town Mayor Norman Scott for a hug on Monday. Morrison was peeved at being kept in the dark about a facelift to the Natural Bridge – a parish Labour Day project – in Riversdale in her constituency.

In blistering criticism of Mayor Norman Scott and the St Catherine Municipal Corporation, lawmaker Kerensia Morrison accused the local government authority of keeping her in the dark about the official parish Labour Day project in her constituency.

Morrison, who represents St Catherine North East, labelled the facelift a one-day effort that ran counter to a national objective orchestrated by her to make the organically formed site a significant monument.

In a broadside against the mayor, Morrison poured scorn on Scott for the neglect of Spanish Town, where major improvements are needed.

“I am very impressed that His Worship has selected a project in North East St Catherine instead of focusing on the much-needed rehabilitation of the capital town over which he presides,” said Morrison in a Gleaner interview.

“There are issues in Spanish Town, such as drain cleaning, road rehabilitation, the infestation of rats. Those are issues that the mayor could attend to.”

A rodent scourge has long dogged the historic town, with the police lock-up and hospital both affected over the last three years.

The corporation’s Civic Affairs Committee had selected the Natural Bridge in Riversdale as the main project. Curators of the bridge, which is considered by local folk as the eighth wonder of the world, believe that the monument has the potential to be transformed into a tourist and historical attraction.

Morrison said that the Natural Bridge has been a matter of discussion with the Tourism Product Development Corporation. She believes that the development potential of the venue transcends a Labour Day effort but requires heavy lifting nationally.

The MP took direct aim at Scott, who chairs the municipal corporation, suggesting a lack of courtesy on his part.

“I understood that the Natural Bridge was selected as the parish project. I was not told by His Worship, the mayor. I am only travelling through here where I saw him.

“... It would have been nice if he had formally extended an invitation to the member of parliament,” she argued.

Scott, however, told The Gleaner that he had sought to contact the MP many times without success.

“Going forward, the taste of the pudding is in the eating, so this is the start of something to come. Based on her utterances, we will see,” the mayor said.

The limestone site was earmarked for major development in 1989 by then Member of Parliament Anthony Johnson, but those grand plans are yet to be fulfilled.