Cousins to turn up heat on agriculture, water, but Charles Jr unfazed 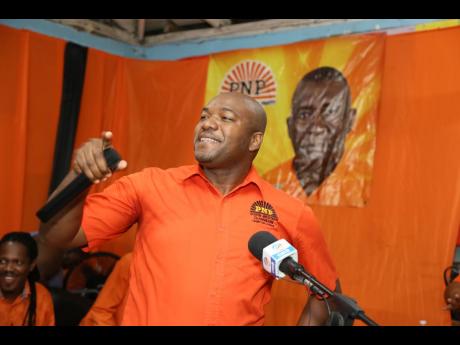 Agriculture and Fisheries Minister Pearnel Charles Jr is unfazed by a threat by his opposition counterpart, Lothan Cousins, to take the Government to task for not doing enough for the sector when Parliament sits today.

Speaking at the People’s National Party’s Toll Gate divisional conference in Clarendon on Sunday, Cousins, who is the opposition spokesman on agriculture and water, complained that the productivity of local farmers was being hampered by lack of resources, charging that the Government should also do more to offer technical support.

“I will serve notice on the minister of agriculture that he must look out, he must watch out, because we nah hol’ back. Wi a go all out. We a go ensure that the people of Jamaica know that the People’s National Party is the party that supports rural communities and the agricultural community,” said Cousins.

He said that he intends to lead parliamentary discussions on “deficiencies at the National Water Commission (NWC) over the last umpteen years”, adding that he would also put forward solutions to have water-deprived communities get easier access to the commodity.

“Solutions to ensure that communities like Mount Airy and Stewarton – all the communities in the hills – have water in abundance,” he said in reference to communities across his Clarendon South Western constituency.

“What we need is to ensure we provide the farmers with the tools that they need for the domestic market – fertiliser, technical support. Those things are lacking.

RADA (Rural Agricultural Development Authority) is failing, the Government is failing, and they are doing everything to lose this election,” Cousins said, referencing the long-delayed local government polls.

When The Gleaner contacted Charles Jr, he scoffed at Cousins’ claims, saying they were political.

“He’s in Opposition. He has to say things [to be] relevant ... . He’s going to say whatever he thinks will support his position as an opposition representative,” the agriculture minister quipped.

Charles Jr said that under the current administration, the country has seen the highest level of production in history.

“So for somebody to say that, it means they are either blind or subjecting themself to being ignorant,” he said, adding that he will be undertaking programmes to continue to improve the sector as the ministry boosts its support to farmers.

“We have to focus on action. I’m focusing my attention on executing productive intensive programmes, executing the support that we’re giving to poultry farmers and the distribution of fertilisers to support boosting of production,” said Charles Jr, noting that Jamaica was also playing its role to help CARICOM reduce extra-regional imports by 25 per cent by 2025.

“Those are the things I’m focusing on and developing our capacity for our farmers and fishers to maximise their potential and helping to push my agencies like RADA, for us to improve our functions where possible,” he told The Gleaner.